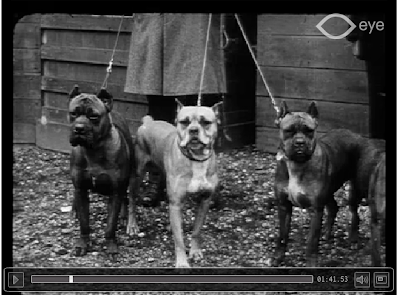 The picture, above, is from a bit of video taken in 1922 in the Netherlands, showing Boxers of that era.

As I have noted in the past, the old Boxer dogs were pretty nearly indistinguishable from modern Pit Bulls.

That's not too surprising, as Boxers, Pit Bulls and Rottweilers are all "butchers dogs" coming from more-or-less the same gene pool prior to the instant breed creation that began to occur after 1873.

The goods news for Boxers and Rotties and the Pit Bull known as the "American Stafforshire Terrier" is that when these butcher's dogs got pulled into a formal registry, they began to be bred for pet purposes alone.  Over time, some of the hot temper in the original butchers dogs has been drained out.  Not all of it, to be sure; like most things, it's a process not an event.

The good news is that when these slightly more phlegmatic Kennel Club dogs are combined with slightly more responsible owners, the incidence of mayhem and abandonment seems to drop.  Good news all around!
.

I spent a couple years in a village outside Leipzig soon after reunification. Rottis there were the preferred farm dogs... and farms were high walled and locked down at night. Farm dogs were serious guard dogs but also,historically, used to pull carts.
It's worth noting that some places were turbulent in the 19th and 20th centuries, and dogs played a role in protecting wealth rural landholders from the poor and dispossessed.
The Filo Brasiliero is probably the most developed of this breed type, but I suspect convergent trends in colonial Africa.