White Women at the Dog Shows 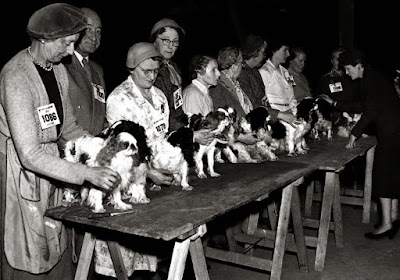 Dog shows are not normal places, not even in the world of dogs.
While 71 percent of men age 18-44 own a dog (as compared to 60 percent of women of the same age), a 2002 report from the AKC Delegates Meeting reveals that 75 percent of AKC breeders, and 72 percent of AKC buyers, are women. This is a phenomenal gender bias, and it's about dog SHOWS, not dogs.
As "Showsight" notes:

The lower the level of competition, the higher proportion of women. It’s not uncommon to see classes in most breeds made up entirely of woman.

And it's not just gender that skews; so too does race.
Minorities at dog shows are phenomenally under-represented, while white woman are phenomenally over-represented.
While white women represent about 36 percent of the US population, white women represent twice that percentage of exhibitors at dog shows.
What's all this mean?
Well, at some level it means that if we are looking to end the breeding of diseased, deformed, and dysfunctional kennel club dogs, we need to think about the audience we need to be talking to, which is disproportionately white women.
What are their values, and why does canine health, function, and temperament rate so low that these attributes are still afforded ZERO points within the kennel club show structure?
What is it about white women that seems to disproportionately attract them to a system of competitions where appearance and fake story are valued more than genuine canine health, canine work, and canine temperament?
It may be a combination of things:

1. Women who want to compete but have less places to do so;
2. Women with hair dresser and beauty queen frustrations forged in very early childhood;
3. Women with displaced maternal instincts (no children or grown children) who are redirecting with dogs.

Points #2 and #3 may be why there are a disproportionate number of women and gay men at dog shows — a phenomenon explored in the comic film “Best in Show”.
Another factor may be politics. A lot of women at dog shows are conservative republicans of a certain age — folks who may reject the idea that women are much more than the sum of their body parts, or that skin (or coat) color are of no importance.
Whatever the reason, the phenomenon is easily observable.
If something is broken in the world of show dogs (and it is), then it’s got something to do with the folks who show dogs — a cohort that is NOT representative of either America or of dog owners.

I did a couple nose-work (finding hidden scents) classes with my dog, and was surprised to find the nose-work community at least locally is almost exclusively middle-aged and older women, many of whom also bred or showed their dogs. Dog and I both enjoyed it, but didn't really fit in with the crowd.