Let Us Give Thanks for Wild Turkey and Uncle Sam 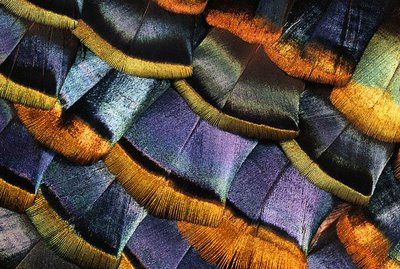 Wild Turkey Feathers. This is a repost from Nov. 2008

Let us give thanks to the Wild Turkey, America's largest ground-nesting bird.

Back when my grandfather was born, the Wild Turkey was teetering on the edge of extinction. Today we have more Wild Turkeys in America's woods than existed in pre-Columbian times.

How is that possible?

Good question. But before we get there, let's dwell a little bit longer on the miracle.

You see, it generally requires a lot of forest -- 2,000 acres or more -- to maintain the kind of food crop and cover that Wild Turkey need to thrive. The reason for this is that in the dead of winter, Wild Turkey depend on acorns and other nuts and seed for survival. This food is only produced in abundance by mature hardwood trees -- oak, beech, dogwood, cherry and gum.

So what's the big deal? We have a lot of forest in America.

Wild Turkey populations were further pushed to oblivion by rapid improvements in gun accuracy, and weak game laws that had yet to catch up to the changing dynamics of landscape and technology.

Then, an amazing turnaround occurred. That turnaround started with passage of the Lacey Act in 1900. The Lacey Act ended commercial hunting of wild animals.

To put it simply, commercial hunting is to sport hunting what gill-netting is to fly fishing. One comes with a factory ship attached; the other a simple wicker creel.

No single action has done more to improve the status of American wildlife than passage of the Lacey Act. Prior to its passage, commercial hunters bled the land white, shooting everything that moved. Wild game merchants sold pigeons for a penny apiece, and ducks for only a little more.

Hunters, using cannons loaded with shrapnel, would shoot 400 ducks in a day in Maryland's Eastern Shore marshes, while market deer hunters would set up bait stations near roads and shoot 20 deer in a night.

The Lacey Act helped put an end to this kind of unrestricted slaughter of American wildlife, but it did nothing to restore badly degraded habitat.

Wildlife without habitat is a zoo.

Habitat without wildlife is scenery.

America -- still a young nation -- remembered when it had both, and it wanted it all back.

The second steps on the road to wildlife recovery occurred between 1905 and 1911. It was during this period that Theodore Roosevelt set aside 42 million acres as National Forest and created an additional 53 National Wildlife Refuges as well.

It was also during this period that Congress passed the Weeks Act authorizing the U.S. government to buy up millions of acres of mountain land in the East that had been chopped clean of its forest in order to obtain wood for railroad ties, paper, firewood and timber.

With the Depression of the 1930s, and rapid migration of millions of people from the rural countryside to the city, more and more marginal farmland began to revert back to woody plots.

Spontaneous forest regeneration in Appalachia, along with tree-planting by the U.S. Government-funded Civilian Conservation Corps, helped restore more than 6 million acres of hardwood forests on denuded land purchased under the Weeks Act.

In 1937, the Wildlife Restoration Act (aka, the Pittman-Robertson Act) initiated a new tax on rifles, shotguns and ammunition, with this dedicated revenue going to help fund wildlife conservation.

In the case of Wild Turkey, initial restocking efforts were not successful. Turkey eggs were collected from wild birds, and the poults that were hatched were released into the wild. Unfortunately, these pen-raised birds were quickly decimated by predation and starvation.

New tactics were tried. A few adult Wild Turkeys were caught in wooden box traps intended for deer (picture of deer trap at right). These Wild Turkey were then moved to suitable habitat, but these adults birds also perished under the onslaught of predation.

The reintroduction of Wild Turkeys was beginning to look hopeless.

Moving an entire flock of Wild Turkeys seemed to work. The first few flocks that were relocated out of the Ozarks (the last stronghold of the Wild Turkey) began to thrive, in part because regrown forest provided more food stock for the birds to live on. The millions of acres of mountain land purchased in 1911 under the Weeks Act had, by now, become large stands of maturing hardwoods in the National Forest system. Turkeys caught in a cannon net.

Systematic restocking of Wild Turkey continued through the 1950s and 60s, and by 1973, when the National Wild Turkey Federation was formed, the population of wild birds in the U.S. had climbed to 1.3 million.

With the creation of the National Wild Turkey Federation, more sportsmen and private land owners were recruited for habitat protection and Wild Turkey reintroduction.

Today, the range of the American Wild Turkey is more extensive than ever, and the total Wild Turkey population has climbed to 5.5 million birds.

Wild turkey hunting is now a billion-dollar-a-year industry, with 2.6 million hunters harvesting about 700,000 birds a year.

And so, when we are giving Thanksgiving this Thursday, let us remember not only the Wild Turkey and America's hunting heritage, but also such "big government" programs as the Weeks Act, the Endangered Species Act, the Pittman-Robertson Act, the National Forest Service, the U.S. Fish and Wildlife Service, and the Clean Water Act.

Without Uncle Sam -- and your tax dollars -- much of America's wildlife would now be gone.

It was Uncle Sam -- and Mother Nature's natural fecundity -- that brought back the Wild Turkey, the Beaver, the Elk, the Whitetail Deer, the Black Bear, and the Bald Eagle. Ted Nugent and the National Rifle Association were nowhere to be seen, and neither were Bass Pro Shops or salesmen pushing Yamaha ATVs.

So next time you are in forest or field, remember Uncle Sam, and thank God for Mother Nature. Whether you know it or not, your hunting and fishing has always depended on both of them.