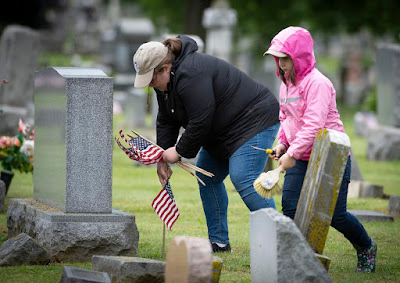 The cemetaries up the street are planting flags.
The smaller cemetery holds the grave of Roger B. Taney.
Taney was the fifth Chief Justice of the United States (1836-1864), and he delivered the majority opinion in Dred Scott v. Sandford (1857), ruling that African Americans could not be considered citizens and Congress could not prohibit slavery in the territories of the United States.
Taney and the Dred Scott decision were the iron and flint that sparked the American Civil War.
Taney’s gravestone describes him as “a pious and exemplary Christian” — a reminder that the Bible applauds slavery and winks at murder and rape.
Taney was a slave holder (of course), and the brother-in-law of Francis Scott Key who is buried about a quarter mile away, at the larger cemetery, and who authored the Star Spangled Banner.
Francis Scott Key was a slave holder too, and the third verse of the Star Spangled Banner is an explicit threat to slaves who sought freedom.
The larger local cemetery, Mount Olivet, has a Facebook post up this morning that begins:

“Memorial Day Weekend and time to meet a few more of the brave veterans that sacrificed their lives for the freedoms we enjoy today.”

But I added a coda in the comments, noting that Memorial Day is also:

“A day to remember all those buried here, and in other nearby cemeteries, who died trying to enslave others; who sought to subjugate, oppress, exploit, shackle, and humiliate people based on the color of their skin.”

I went on to note that:

I then noted that the Wikipedia page for this cemetery shows the picture appended below. 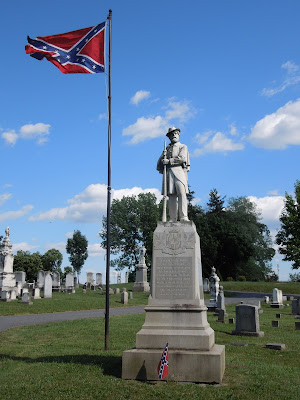 For those outside the US, that’s the flag of treason, insurrection, racism, and slavery. Flying that flag in America is no different than flying the Nazi flag in Germany. Whatever you mean by it, it’s got nothing to do with celebrating “the freedoms we enjoy today.”
What’s any of this have to do with terrier work?
Well, for one thing the larger cemetery is riddled with groundhog holes, and is a very fine place to photograph a few of them cavotting among the stones.
And as for the dirt they dig through, it’s made of the bones and bodies of patriots and traitors alike.
And no, not all soldiers fight for freedom. 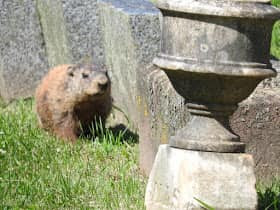 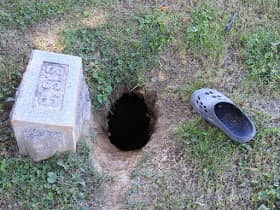 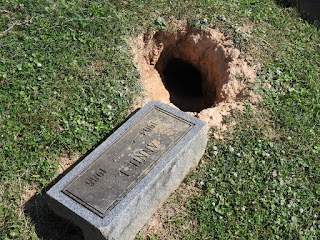 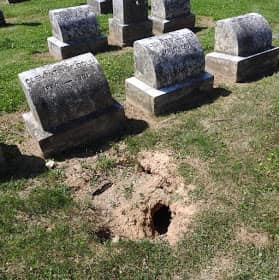