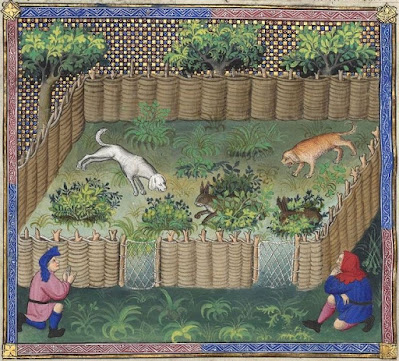 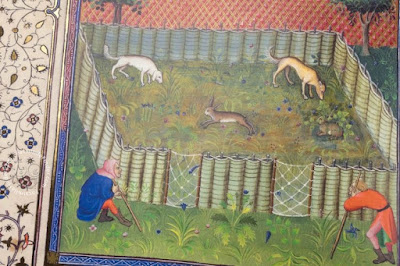 T
The text is in Medieval French, and the illustrations are (allegedly) from Gaston Phoebus (but I could not find them in his most commonly-cited work).

This is not normal long netting as practiced in modern England.

In discussion, the consensus was that this was a type of rabbit warrening with wattle fencing to keep rabbits driving toward the gate nets and not too fast dogs inside to keep them moving after a ferret drove them from the earth.  One school of thought is that the wattle fencing is shown out of scale; another is that the fencing is movable.
Rabbits were introduced to England from mainland Europe around the year 1000, but they did not thrive in the cold, damp climate of England, and a great deal of effort was made to establish artificial burries (high mounded ground) on well drained land, preferable on a slope.  It was not until about 1700 that wild rabbit populations became very common across much of England.