On This Day, the Last Passenger Pigeon 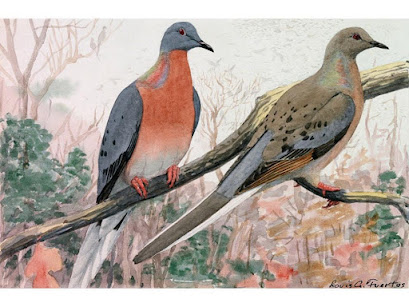 ‪They used to be the most common bird in North America, and now they are extinct,
On 1 September 1914, the last Passenger Pigeon, named Martha, died of old age at the Cincinatti Zoo.‬
Why do we romanticize the Passenger Pigeon while funding government programs to hunt Mourning Doves
It's like romanticizing the wolf when it was not here, while putting a bounty on the coyotes up the road.
And why do we mourn the Passenger Pigeon or the Carolina Parakeet when our cities are full of pigeons we consider vermin, and there are more species of wild parrots in America today than ever before?
As for extinctions, they are far less common than most people realize.
Over the course of the last 400 years, only about 850 species of vascular plants and vertebrate animals are listed as having gone extinct by the IUCN Red List. In addition, the IUCN reports several species being "rediscovered" every year after having previously listed them as "lost".
US extinctions are illustrative: despite a massive increase in US population, coupled with wholesale destruction of every kind, very few US animals have been pushed into extinction, and those few that were, were often pushed over the final edge for an aberrant reasons. The Passenger Pigeon is an example.
Though the bird was pushed to the edge by a combination of market hunting and forest loss, both abetted by the railroads, the last push was biological.
Passenger pigeons required large numbers of the birds to gather in order to trigger mating -- a trait common enough with domestic pigeons that breeders have learned to put up mirrors inside pigeon houses in order to stimulate sex among rare breeds and species.
When Passenger Pigeon numbers dropped below a certain local threshold, mating simply stopped as the hormonal surge required was not triggered.
Because we did not fully understand this phenomenon at the end of the 19th Century, captive breeding programs for the last Passenger Pigeons failed.
Might it be possible, one day, to scrape together DNA from taxidermy skins and clone a new colony of Passenger Pigeons?
Maybe.
The idea here is to take eggs of Band Tailed Pigeons and somehow introduce Passenger Pigeon DNA. The cross would then be repeated until, at last, a more-or-less pure Passenger Pigeon was created.
Of course, it's never been done and yes, attempts to clone extinct species has been tried for more than 30 years. Talk is cheap, and science is hard.
But might it be done ... someday?
Yes.
The world is running fast and cellular biological knowledge, in particular, is building rapidly.
Never say never.
In fact, at some point, it may be "never say die."

We may be here already.
I saw this past week someone using nothing but stem cells created the beginning of a brain, heart and one more part of the equation.
No X Y chromosome to deal with.