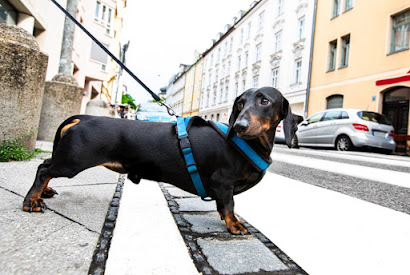 A new German law to take effect next year will **allegedly** require dog owners to walk their pets twice a day. The Guardian reports:

Germany’s dog owners will soon to be ordered by law to walk their pets twice a day.
The country’s agriculture minister, Julia Klöckner, has said she is introducing the new law based on evidence that many of the nation’s 9.4 million dogs are not getting the exercise or stimuli they need.
Under the new regulations in the Hundeverordnung, or Dogs Act, owners will not get away with a quick jog round the block, but will be required to take their dogs out for at least one hour on each occasion.
Klöckner said the rules were based on new scientific findings that show dogs need a “sufficient measure of activity and contact with environmental stimuli”, including other animals, nature and people. The tethering of dogs on a chain or a lead for long periods also faces an all-out ban.
Dogs may not be left alone at home all day, and a person will be required to take care of their dog “several times a day”.
Klöckner said: “Dogs are not cuddly toys. They also have their own needs, which need to be taken into account.”
How can we say we love our pets when we treat them so badly?
News of the law, which is due to be introduced next year and was made widely known for the first time this week, has prompted a lively debate in Germany.
The main question is how it will be possible to check up on the 19% of German households that own dogs, which as pets are second in popularity only to cats. A spokeswoman for the agricultural ministry has said the authorities in each of Germany’s 16 states will be responsible for enforcing the law.
But ridicule over the regulation has come even from within Klöckner’s own party, the Christian Democratic Union. Saskia Ludwig, a CDU MP who also sits in the state assembly for Brandenburg in Potsdam, said the current heatwave meant it was not suitable for dogs to be out for so long. She tweeted: “VOLUNTARY DISCLOSURE: I will not be taking my Rhodesian Ridgeback for two rounds of walks in 32 degrees heat (90 degrees fahrenheit), rather we will jump in the river for a refreshing cool down instead.”
Bärbel Kleid, the owner of a five-year-old Yorkshire terrier called Sam, who lives in Berlin, said: “I find it patronising to be told how long I should take my dog out for. And who is going to check up on me? Will the neighbour call the police if they suspect me of not taking Sam for long enough walks? He wouldn’t manage two hours a day anyway.”
Walther Schweiz, said his dog, a 14-year-old Alsatian called Blu has cancer, and was unable to do more than short walks close to his house in Cologne.
“They should trust people to get on with their own lives. They’ll be telling cat owners how often they need to change their litter trays next,” he said.

Under the new law puppies will be required to have human company for at least four hours a day and no breeder can care for more than three litters of puppies at a time.

The law would also ban any animal with cropped ears or a docked tail from competing in dog shows.

So now a genuine question:  Is this what the law REALLY says??

I read seven articles on this law -- three in English and four in German (translated with Google), and none actually linked to the law.

Then early this morning, I found the German press release on the law which says the dog walk requirement is for a TOTAL of one hour outside of a KENNEL, i.e. you cannot lock a dog up 24 hours a day, 365 days a year.

To re-state:  This law has nothing to do with how pet dogs are normally kept and is actually quite sensible.  The newspaper articles (in two languages!) on this law made a COMPLETE hash of it.

A great sadness in the world of dogs are owners who fail to recognize that dogs are fully sentient beings that need more than food, water, shelter, and sanitation. Dogs also need mental stimulation and exercise every day, no exceptions.

This means that if you kennel your dogs twenty-four hours a day, seven days a week, you are failing your dogs. In fact, you are treating your dogs worse than the most hardened of psychopathic criminals on death row.

And yet, how often do we see this? All the time!

Go to any commercial breeding or long-term boarding kennel, and you will see cage after cage of dogs deprived of the most basic kind of mental stimulation. Most are rarely walked or even turned out from their cages. Instead, a high-pressure water hose is used to blast feces into the scuppers. The gate to the kennel run may not be opened in a week

This is not a life. This is abuse.

The law would also ban the showing of dogs that display "torture breeding" characteristics, as well as re-codify Germany's current ban on tail and ear cropping.

I have written about torture breeding laws and about tail cropping regulation in the past. These two issues are quite different from each other, but they are certainly within the reasonable purview of national regulation and legislation.

The news reports as so often does not really give an accurate account of this proposed law. The impression is given that people are required to walk their dogs for two hours a day. This is nonsense, it proposes a minimum of two sessions of at least an hour a day that the dog is taken out of his kennel/enclosure.
So it is meant as a tool for authorities to be able to take action when people house a dog 24/7 in a kennel. And that is not a bad thing.

I agree, dogs should not be stuck in cages most of the time. It damages their mental health. I know, because my female husky spent the first 2 years of her life locked in a cage most of the time. She was owned by this college kid that wasn't allowed to have dogs at his apartment, but he got a husky puppy anyway. He kept her at random friends' houses. She bounced around a lot. She was everyone's responsibility, yet nobody's responsibility. So, she was very neglected. Her fur was nothing mats because I don't think she was brushed EVER, and it took me forever to brush it all out. Her fur was also greasy and flaky. She stunk really bad like old corn chips. And she was skinny. You could still feel all her bones though her thick, matted fur. She had food in her cage 24/7, so she wasn't starving. She just never wanted to eat much. Anyway, her coat is perfect now and she's no longer too skinny. I take her biking and to the dog park. I've had her over 3 years, but she still has this weird attachment to her crate that I can't break her of. If I try to take her crate away or lock her out of it, she freaks out and shits in the house. She will also eat grass like a cow and then barf all over the place. Her anxiety goes through the roof and she will hide under the kitchen table and do that stressed panting. So, I let her keep the crate. I never make her go into it because she is a good girl and is very well behaved (if she's not freaking out about her missing crate), but she stays in there a lot. When people come over they ask what she did wrong to be locked in her crate. The answer is always nothing, she goes in there on her own and the door just shuts on its own. I never lock it. I would prefer to get rid of it but I can't. You know, I got my male husky first, and I trained him using the tethering method. I feel that works a lot better than crate training. So, he's never been locked in a crate in the 8 years I've had him. I can tell he is much better off mentally. I don't know if his previous owners crate trained him at all. Probably not, because he was 100% not trained in anything else when I got him. Wow, sorry for the ramble haha.