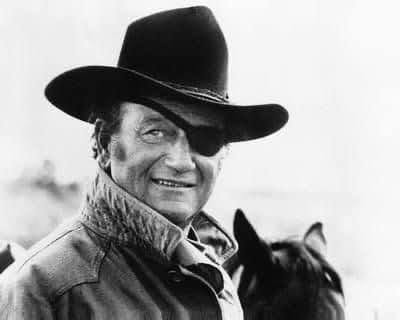 Right now in America, we have police forces on top of police forces, all of them LOOKING for confrontation and LOOKING to make trumped up charges, especially against minorities and the young.  As Sean Trainor noted on a Twitter thread:

A long time ago, when I was younger and dumber, I did a police ride-along with a high school classmate who had gone on to become a cop.

It was one of the most chilling and radicalizing nights of my life.

Two memories stand out to me. The first is how my classmate spent most of the night: rolling around suburban Maryland in a patrol car, punching license plate numbers into a database, looking for excuses to pull people over.

My classmate was so bored that he’d punch pretty much anyone’s plate into the database. But he devoted special attention to beat-up cars or drivers who looked “out of place” — which typically meant black or brown drivers in predominantly white neighborhoods.

Fortunately, few of those searches resulted in traffic stops. I seem to recall my classmate pulling over a guy for a broken tail light. But, for the most part, he spent the night driving around aimlessly.

To punctuate his boredom, my classmate would respond to other cops’ traffic stops. When he heard another cop had pulled someone over, he’d turn on his lights and tear off into the night.

Most of the time he’d arrive at the scene of the stop long after the incident had passed. One time, though, the traffic stop was still ongoing.

In this instance, a colleague of his had pulled over a car for some trivial reason — a broken tail light or expired registration — and then discovered that the driver was, as I recall, an ex-convict driving with an expired license.

The guy (who was white) had gotten out of prison earlier in the week and hadn’t had a chance to renew his license. When he got pulled over, he was driving around with his wife and young kids.

Not content to leave this poor guy with a warning, the officer who initiated the traffic stop asked him to step out of his car for a conversation. As they were talking, more and more bored cops rolled up, including my classmate.

Not surprising, the situation kept getting more intense. The guy who had been pulled over looked increasingly stressed as more cops materialized. And the cops responded to his stress with heightened levels of aggression.

Eventually the scene came to a boil. I don’t know exactly what happened. I seem to recall the guy taking a swing at a cop or raising his voice. Regardless, he wound up face down on the curb, his hands cuffed behind his back.

His family looked on screaming and crying as the cops hauled him away. It had been a short family reunion.

As we drove away, my classmate told me that, because this guy had violated his parole, he would likely do a multi-year stint in prison.

And that was night: a full shift devoted to manufacturing crime — desperately searching for reasons to pull people over and then harassing people until they snapped.

My classmate wasn’t an exception to his department’s rule. He wasn’t a “bad apple.” As he told it, he was doing exactly what his department expected him to do. He saw himself — in fact had been trained to see himself — as a dog protecting sheep from wolves.

But from inside his car, the sheep receded from view, and all the flesh-and-blood people in his community — and especially the people of color — took on a decidedly wolf-like aspect. He clearly viewed them as enemies and interacted with them as such.

In short, nothing he did made anyone safer. He didn’t protect or defend a damn thing, except white supremacy and class domination. His entire shift had been devoted to profiling, harassing, and intimidating people. 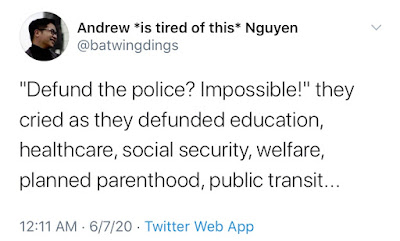 So what happens when you defund the police?  You don't eliminate all police; you simply reduce their numbers so they no longer become predators on the public.

500 cops in Terminator battle dress can fight peaceful demonstrators.... AND WILL.

Five cops in civilian blues will target the looters and enlist peaceful protesters to help.‬

The latter is in the American tradition — a sheriff and a deputy enlist local citizens to help keep the peace.

The former is every fascist state.

American fascism and racism has deep roots that pervade every aspect of the American criminal justice system.  Most people are not aware of the origins of the American police department. As the National Law Enforcement Museum notes, it's not pretty.

When one thinks about policing in early America, there are a few images that may come to mind: A county sheriff enforcing a debt between neighbors, a constable serving an arrest warrant on horseback, or a lone night watchman carrying a lantern through his sleeping town. These organized practices were adapted to the colonies from England and formed the foundations of American law enforcement. However, there is another significant origin of American policing that we cannot forget—and that is slave patrols.

The American South relied almost exclusively on slave labor and white Southerners lived in near constant fear of slave rebellions disrupting this economic status quo. As a result, these patrols were one of the earliest and most prolific forms of early policing in the South. The responsibility of patrols was straightforward—to control the movements and behaviors of enslaved populations. According to historian Gary Potter, slave patrols served three main functions.

“(1) to chase down, apprehend, and return to their owners, runaway slaves; (2) to provide a form of organized terror to deter slave revolts; and, (3) to maintain a form of discipline for slave-workers who were subject to summary justice, outside the law.”

Organized policing was one of the many types of social controls imposed on enslaved African Americans in the South. Physical and psychological violence took many forms, including an overseer’s brutal whip, the intentional breakup of families, deprivation of food and other necessities, and the private employment of slave catchers to track down runaways.

Slave patrols were no less violent in their control of African Americans; they beat and terrorized as well. Their distinction was that they were legally compelled to do so by local authorities. In this sense, it was considered a civic duty—one that in some areas could result in a fine if avoided. In others, patrollers received financial compensation for their work. Typically, slave patrol routines included enforcing curfews, checking travelers for a permission pass, catching those assembling without permission, and preventing any form of organized resistance. As historian Sally Hadden writes in her book, Slave Patrols: Law and Violence in Virginia and the Carolinas,

“The history of police work in the South grows out of this early fascination, by white patrollers, with what African American slaves were doing. Most law enforcement was, by definition, white patrolmen watching, catching, or beating black slaves.” 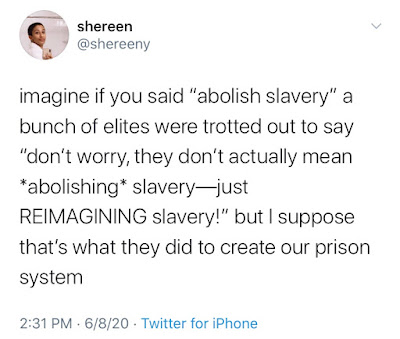 So what else needs to be done, beyond steeply reducing police numbers?


1) Demilitarize the police;
2) Diversify our response tools, and;
3) Increase accountability.


The first point means that we need to strip away the Terminator battle dress so popular with the current brand of cosplayer cops, and return to dress blues of the kind that Andy Griffith (and every other policeman) wore in the 1950, 60s, 70, and 80s. We need to get rid of the tanks, armored personnel carriers, and bullet proof vests. Most of all all we need to get rid of 90 percent of all police guns. It's insane to give every cop a gun (and complete impunity) and send that same guy with that same tool (and damn little training) to every situation all the time.  Guess what?  You need more than one tool in the box!

Which brings me to the second point. A cop with a gun and little training is the wrong person to address an autistic man with anxiety, a man selling loose cigarettes, or a store that has just been given a possibly counterfeit $20 bill. He's the wrong person to address a drug or alcohol dependency issue, mental illness, and barking dog problems. It's been said that if the only tool you have is a hammer, then everything is a nail, and so it is with a gun. If the police are given little training but a lot of guns, batons, and Tasers, what do you think is the predictable outcome?

Which brings me to the third point: Accountability.

In 35 states a cop can rape a woman he just picked up on a traffic stop, and if he says it was consensual, he's off the hook. Police are -- literally -- the only group of people entirely exempt from law enforcement. They refuse to be overseen by citizen review boards. the District Attorney's office, journalists, citizens with cell phone cameras, or even their department heads. If a policeman commits murder in the United States, he is guaranteed to get away with it. even if it is on camera and unprovoked.

Every policeman (in every force) in the US need to be required to wear both a body camera and clear identification sewn or stenciled onto their shirts, jackets, and helmets.  If a policeman has turned off his body camera or is wearing no identification or the wrong identification, it should be an immediate firing offense. Zero tolerance. In addition, local District Attorneys should be required to publish statistics on how many civilian police complaints were made (and their nature) and how they were adjudicated. Why should only civilians have permanent police records? Finally, civilian police review boards need to be created to oversee every police department, with fines, settlements, and judgements coming straight out of the police department pension funds, with every police officer receiving an annual report on how much their collective pension declined due to civil rights abuses on the job. If you want to change a culture, tie consequences to collective action. 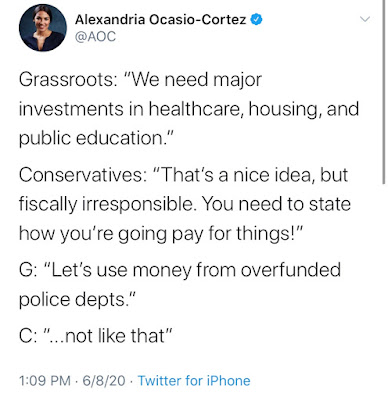