Pit Bulls Are Not Terriers 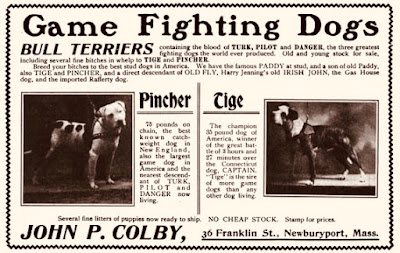 Pit Bulls are NOT terriers in any way, shape, or form; they are Molossers. Slapping the name “terrier” on a breed was common among early dog dealers seeking to suggest their dog was tough and game.

In the era before pit fights were illegal in Britain (1835), it was illegal for a commoner to own a big game hunting dog (such as a bulldog), but it was fine to own a terrier with a cropped tail which was not to be taxed.  So what did people do?  They called their smaller pit bull dogs "terriers," same as a Pit Bull owner today might tell his landlord his or her dog was "actually a Vizsla".

Shown above is an advertisement by John Colby for stud service for of two of his “fighting dogs”. Three quick points: