Pet stores, like nearly every other retail establishment, are getting their ass kicked by Amazon, Chewy, and online sales points selling everything from cheaper x-pens and crates, to better leashes and collars, as well as fresher and cheaper dog food.

Have you been in a pet store lately and looked at their leash and collar selection? The prices on crates? Ugh!

Of course, pet store puppy sales have been disappearing for 40 years, a phenomenon I have documented in the past.

Here’s why: that pet store puppy being sold at 8 weeks was snatched from its mother at 6 weeks, bundled with perhaps 100 or more other dogs from other breeders, and then transported hundreds of miles in the back of a truck.

Setting aside socialization issues, puppies from 6-10 weeks old do not have stable immune systems and so vaccination schedules have to be adhered to and puppies should NOT be mixed with other dogs or even allowed in a pet store or park during this critical time.

The result of disobeying the rules and mixing a lot of very young puppies is predictable: a significant number come down with distemper and parvo, to say nothing of lung and eye infections.

Disaster, disease, debt, and death is the storyboard again and again. This is structural. It’s the “deal with the devil” that every puppy mill and pet store has made.

The good news is that the door leading to predicable and avoidable disease, death, and debt is slowly being closed.

Will the law have a huge impact?

Not in Maryland, where only seven puppy-selling pet stores still exist.

As with everywhere else, most decent pet stores in Maryland got out of the puppy peddling business decades ago.

Does that mean there are no dogs to be had at PetSmart, or whatever pet store is located near you?

Most of these locations hold rescue roundups several times a month, with volunteer foster-folk showing up with vaccinated spayed and neutered dogs that have stable immune systems because they’re more than 4 months old.

One such dog is curled up in my lap right now — a pure North American Pocket Lurcher descended from the famous ratting dogs once owned by Richard Toner. Look it up!

Has the California law had an impact? Not much in California where there has never been a shortage of dog breeders or rescue dogs.

It has had an impact on the big mid-western puppy mills in places like Missouri, Nebraska and Indiana. I’m told many are simply folding up.

Is that a bad thing?

A handful of failed cattle farmers can no longer make money off misery puppies shipped off to gullible fools making spur of the moment purchases in a pet store?

Cry me a river. 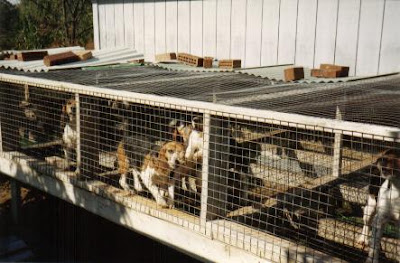