Bald Eagles at the Conowingo Dam 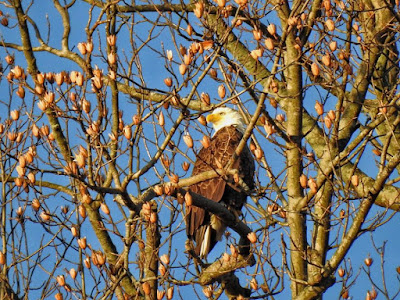 I went to the Conowingo Dam today, north of Baltimore. It’s about an hour and a half drive.

It’s an electric power dam on the Susquehanna River very near where the Jack Russell Terrier Club of America used to hold their annual national trial at Havre de Grace. I’d heard of it, but I’d never been.

Conowingo is supposed to have one of the largest concentrations of Bald Eagles on the East Coast of the United States. I was told that to get parking I needed to be there at the crack of dawn, and that was good advice.

As I got out of my vehicle, however, I realized I was VERY unprepared. The folks here all had big DSLR Sony and Canon camera bodies attached to massive lenses, some of which were as long as my leg, and none of which were less than 20 inches.

The tripods were of a similar size and quality.

These folks were dressed for the cold weather and the wind — camo jackets and hoods with gloves that had tiny finger flick attachments that hinge off to squeeze a shutter. The smartest of the group had full thermal suits.

My guess is that a half a million dollars in cameras and lenses assembled at this spot fairly routinely. 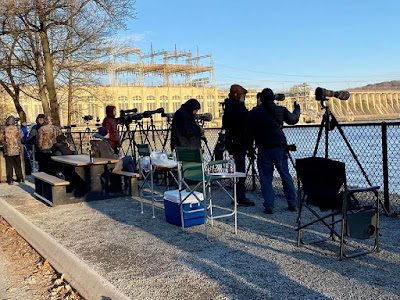 I talked to folks from New York, Philadelphia, Washington, and Ohio. There was a disproportionate number of Asian photographers, but every race was represented.

These folks were on a mission, and they had brought chairs.

I was sporting a Nikon point and shoot with an 82X optical zoom, a $5 neck muffler and hat, an LL Bean barn coat, and bicycle gloves. I had a rickety $30 monopod.

Guess who was cold?

Guess who could not possibly get a decent shot of the more than 30 bald eagles soaring over head, squatting on the dam, and jungled up in trees across the river?

I felt like a guy wearing a Speedo at football practice.

A fellow from Gaithersburg said there were sometimes as many as 100 eagles here, competing with many hundreds of gulls and countless vultures for stunned fish that pass through the electric power turbines. Fish that are ground up feed other fish that congregate below the dam. Apparently this location is a terrific spot for fishing.

The Blue Heron population is supposed to be high here too, but on this day of 25 mph winds, the big blues were not to seen (at least by me). 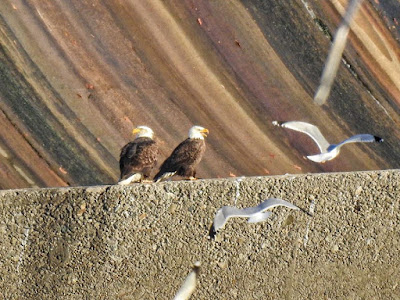 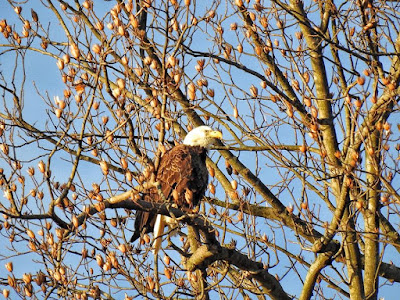