A "New to Me" Ford on the Horizon 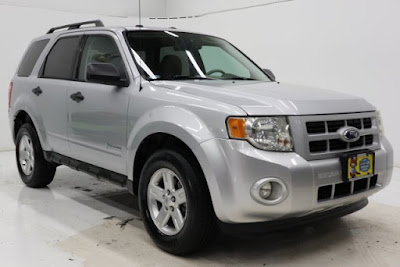 Some years back, against all advice from me, my wife and son went to a car dealership "just to see what they had," and they came back with a completely inappropriate car for my son: a 2006 Mercury Milan sedan (bright red) that was more suited to a real estate agent than a young man with a pit bull and a dog walking business.  You know the car dealer saw them coming!

Now, some years later, that same car has 116,000 miles on it, and we've all been holding our collective breath, waiting for it to fail in some spectacular and expensive manner.

At the same time, I’ve changed a few things in my life, and I have less need for a commuter car and more need for a vehicle in which I can haul mulch, plywood, dogs, bikes, and kayaks.

The solution I've come up with is to sell the Mercury Milan and give my son my Ford C-Max hybrid (he will finish making the payments on it) which gets 41 mpg, and whose back seats fold flat for dogs.

It's a small car, but since he's mostly using it for short-distance client visits associated with his dog walking business, it should save him quite a bit in gas money while also fitting the bill.

My first inclination for a new car for me was to look at a used Ford Escape 4-wheel drive hybrid.

I like Fords because while they are not a glamorous cars, they do not come with a "brand premium" of $2,000-3,000 which seems to be come with so many Toyota's, Subaru's, and Honda's.

I also prefer to buy cars made in America, preferably by union workers. Though Honda and Toyota make a lot of cars in the US, they tend to be in non-union shops.  With this Escape, we will remain union-made vehicle household.  The other car is a Ford Edge.

The newer Ford Escapes have sloped top lines, which I do not like as they remind me of the collapsing haunches on an AKC show-line German Shepherd Dog.  In addition, the tumble home in the rear of these car makes it more difficult to mount a kayak or carry a load on top (such a plywood or a Christmas tree).

A little research, and I found that the roof line on the Ford Escort changed in 2013, and a little more research suggested that there were a very few low-mileage 4-wheel drive hybrids out there.  I was looking for a car with under 45,000 miles on it, and a price point of $15,000 or so.  It could be done.

I have always suspected CarMax has a brand-premium built into their used cars, and so I began by taking price points off their national stock of 2012 Ford 4-wheel drive hybrids, and then working backwards to see if I could beat that price or that mileage. The simple idea was to drill on Cars.com, Cargurus.com, and other auto-find web sites to see what low-mileage 4-wheel drive Escape hybrids were out there within a reasonable distance of (50 miles).

CarMax, from what I can tell, has long-term contracts with a lot of the car leasing and car rental places, and they are typically selling cars with 30-45,000 miles on them, that are 2-3 years old.

The sweet spot with used cars, so far as I can tell, is older vehicles with fewer miles.  Miles are what really matters, but a lot of folks are shy of a used car more than 2-3 years old, no matter the mileage.

Cars that are not coming off-lease or off-rental fleets are vehicles that are being traded in at a dealership for a new vehicle, or else they might be auction vehicles that were consigned after a death, hospitalization, repossession, or bankruptcy.

No matter the source of the vehicle, CarFax tracks who has owned the car (i.e how many times it has been sold), whether the car has ever been in a wreck, flood, had a major repair, or had its airbags deflated, and whether there are any recall notices outstanding on the vehicle.  CarFax also verifies the cars odometer.

This car has had only one owner, has had no wrecks or airbag deployments, and is very clean inside and out. I suspect it was owned by a senior citizen who mostly used it for grocery shopping, which would explain the very low mileage and a possible reason for sale (owner death or now too old to drive).  It came out of Florida, another clue it might have a senior citizen provenance.

The closest CarMax price equivalent for this car that I could find was a car that was $1,000 more expensive, was one year older (a 2011 model), and had 37,000 more miles on the odometer (i.e. at least 3-years worth of driving time).

This vehicle has 8.4 inches of ground clearance, and plenty of leg room for me.

In 2012, this hybrid was #1 in fuel efficiency from Edmunds in the SUV and crossover class.

As with so many things, there is no “right” answer on a car purchase, but I’m reasonably sure I’m getting OK value. Time will tell, of course!

This is my second Ford hybrid, and the technology has proven itself, with some Ford Escapes rolling well past 200,000 miles.

The first Escape was made in 2000, and the first hybrid Escape was sold in 2005, so all of the basic problems were worked out  long before 2012.  Ford Escape Hybrids are are also still being made -- a sign the car's basic design and engineering have stood the test of time.  The Mercury Milan, in comparison, was sold for only one 5-year generation.

If I get 120,000 miles and 10 years out of this Ford Escape, my next car is likely to be entirely electric -- the world is not going to salute the gas engine much beyond that!

My late cousin (David Soloman) who passed in 2009, ran a website (now closed) called: Motorwatch.org (or .com).https://greatnonprofits.org/org/nutz-boltz-inc It was a watchdog site for auto owners. Listing secret warranties and other technical bulletin issues. The monthly magazine/newsletter was called : Nutz n Boltz. He did a cost and 'carbon footprint' analysis of all fuel sources for transportation. From raw material to disposal at the landfill and recycling. He came to the conclusion that diesel powered cars are the 'greenest' and most eco friendly of any fuel source. Reasons: Excellent milage, less toxic emissions, can use non-fossil fuel sources. And the big one: Disposal after the life of the vehicle. Those batteries are toxic waste. The coal fired plants used to generate the electricity for the electric cars are also a large carbon footprint as well. He was brilliant, usually could let us know the problem with our trucks when he referred to the technical service bulletins. It was his cause and calling, having been a mechanic at a Mercedes dealer in Florida years ago. He had passed too early.

Low miles aren't necessarily good on a hybrid. Sitting around unused can be bad for the battery. I bought a lemon of a 2006 Prius with 30k miles.

2,000 miles a year is low mileage, but it's not just sitting there --battery being charged and discharged, fluids moved, etc. Actually about perfect for keeping a car going forever.

The Focus Escape Hybrid gets top marks for durability and environmental impact too. See >>
https://www.greencarreports.com/news/1063767_ford-hybrids-prove-durability-by-racking-up-most-taxi-miles

Hybrid batteries are not scrap at the end of a car's life -- they are refurbished, recycled, and repurposed. Hybrid battery renewal is its own thing (google it), but these batteries are also being repurposed as battery packs for at-home solar cell systems.

"The nickel-metal hydride batteries found in hybrid vehicles are basically "zero-landfill" products. Whatever can't be recycled is consumed in the recycling process, leaving no trash behind."