The Key to Winter Survival 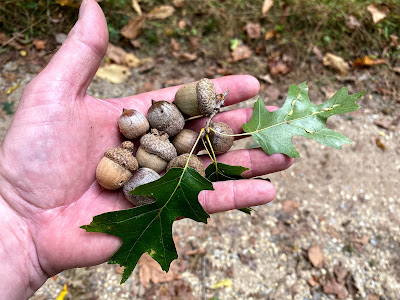 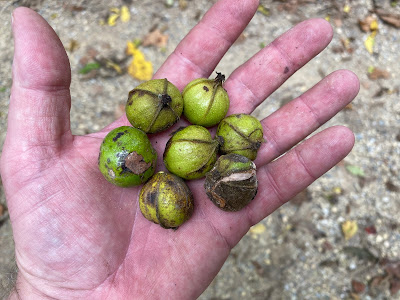 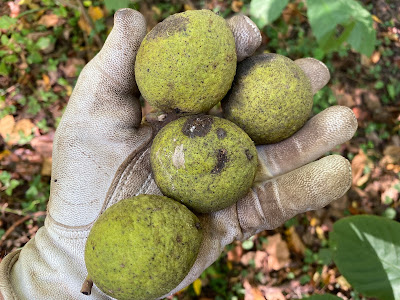 Forest nuts were a key to winter survival for the native forest people of the eastern United States. The high-fat and long-storage attributes of nuts are what made them so valuable as a forest survival food for native people.

Of course, the forest was different then from what it is now; about 25 percent of forest cover in colonial times was composed of chestnut trees, whose large edible nuts were a mainstay.

The American chestnut was wiped out, beginning in 1907, by a quickly-spreading chestnut blight accidently imported from Asia.

The native forest has since filled in with oaks, maples, black cherry, hickory, walnut, tulip, yellow-wood, basswood, buckeye, and many other species, none of which has the enormous mast-nut output of the chestnut, but which provide a great deal of food none the less.

Oaks produce acorns, which can be eaten after first being boiled to remove the tanins which are both toxic, but were also vital to native people who used acorn water to tan deer hides. The boiled nuts leeched free of tanins can be roasted and ground into coffee, ground unroasted into flour, pickled in brine like olives, and made into a spread like humus.

Hickory nuts are abundant, can be eaten straight out of the shell, and are closely related to pecans which they taste like. Hickory nuts are loaded with fats and calories. One ounce of shelled hickory nut meats packs a whopping 193 calories -- the most of any wild plant food.

Black Walnuts are also abundant These large nuts are surrounded by a tough husk which surrounds an extremely hard shell. Walnuts are harvested as soon as the outer husk softens, but is still green. Wear gloves when handling walnuts, as the outside husks stain. Walnut husks can be removed by piling the nuts on a gravel driveway and rolling a car over them, or by drilling a 1-5/8 inch diameter hole in thick plywood, or through the edge of a stump, and hammering the nut through the hole to shear off the husk. Once the husk is off, wash the unshelled nuts, and throw away any nuts that float. After washing, the unshelled nuts should be spread out to dry.  Once dry, unshelled nuts can be stored for up to a year  in a burlap bag hung in a cool, dry place like a root cellar or basement.