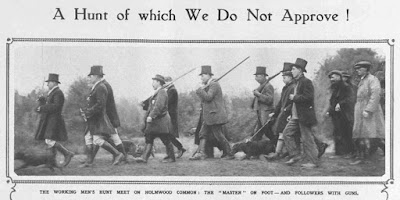 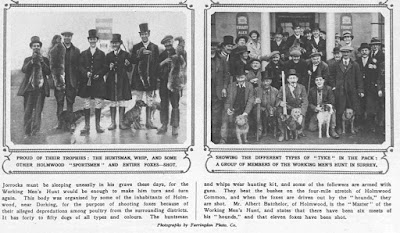 In Britain, fox hunting is inexorably wrapped up in class divisions and ancient economic wounds anointed by lies and disinformation on both sides.

A perfect illumination comes from “The Sketch” of January 1926 in which the picture essay is entitled: “A Hunt of Which We Do Not Approve”

Jorrocks must be sleeping uneasily in his grave these days, for the Working Men's Hunt would be enough to make him turn and turn again. This body was organised by some of the inhabitants of Holmwood, near Dorking, for the purpose of shooting foxes because of their alleged depredations among poultry from the surrounding districts. It has forty to fifty dogs of all types and colours. The huntsman and whips wear hunting kit, and some of the followers are armed with guns. They beat the bushes on the four-mile stretch of Holmwood Common, and when the foxes are driven out by the ‘hounds,’ they are shot. Mr. Albert Batchelor, of Holmwood, is the "Master" of the Working Men's Hunt, and states that there have been six meets of his ‘hounds,’ and that eleven foxes have been shot.


Jorrocks, of course, is a reference to the mounted fox hunting character made famous in humor tracts of the 19th Century.

Notice that fox are being hunted here because they were a problem for free-range poultry. Right there we see the lie of the “antis” exposed. Fox are predators. Are there still a lot of free range chickens? Not as many as there once were, but anyone who monitors farm chat sites will tell you that poorly made coops still see a lot of fox predation. Fox can be a persistent problem for those who keep poultry and rabbits, and anyone who has lost half a dozen chickens or more may come to see killing a fox as a good way to save chicken lives. Who is to say one is worth less than the other?

But notice too that the mounted hunt enthusiasts drip with contempt and disdain that working men would shoot a driven fox without the circus of 50 hounds and 50 mounted riders blowing horns and dressed in velvet finery.

Here we see the mounted hunt enthusiasts actively mocking and minimizing poultry loss because the remedy is guns and not a stampede of horses. The hounds are disrespected, and so too is the hunt organizer.

None of this is new or unique. The sniffing aristocracy of Britain created the artificial crime of “vulpicide” in order to demonize anyone who killed a fox by any means other than horses and hounds. Traps were banned, and poisoned abolished. If fox were a serious pest, traps and poison would be the order of the day, as nothing is more efficient. As for mounted fox hunts, nothing is less efficient, and few things are more chaotic or likely to cause farm damage. Falling in between, in terms of efficiency, is the gun and the walking terrierman who can deal with farm-sized problems with little noise or fuss.