Darwin Sets Sail on the Beagle 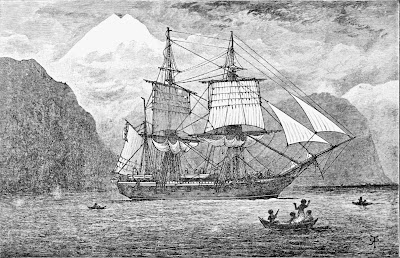 187 years ago today, Charles Darwin set sail from Plymouth Sound on his 5–year voyage aboard HMS Beagle (1831–36) under the command of Captain Robert FitzRoy.

Charles Darwin, was so besotted with country sport that his father despaired he would ever amount to much of anything.

"You care for nothing but shooting, dogs and rat-catching, and you will be a disgrace to yourself and your family," Erasmus wrote to Charles.


In fact Charles Darwin turned out all right.

After washing out of medical school and the seminary, and then letting a romantic relationship drift away (due to his being more infatuated with beetles than women), young Charles signed on as naturalist aboard the Beagle, a survey boat on a voyage around the world.

Darwin returned to Britain in 1836, but it was not until 1859 that he wrote The Origin of Species, and then only after reading Reverend Thomas Malthus’s work on the role of "natural" limits to population growth.

Darwin’s ruminations about evolution were greatly influenced by the amazing varieties of livestock being produced by farmers and fanciers in the U.K. at this time. He was especially fascinated by pigeon breeders who were able to rapidly express all kinds of peculiar variation from the common rock dove — rollers, pouters, fantails, barbs, tumblers, and carriers, to name a few.

It was not much of a leap to speculate that the forced selection being done by pigeon breeders might have a parallel in "natural selection" among finches on a remote volcanic island in the Pacific.

Thus was borne the Theory of Evolution.