The Era of Human Zoos


Carl Hagenbeck was a German wild animal dealer who supplied European zoos and international circus acts.  He more-or-less created the modern zoo with animal enclosures that used moats. and which featured animals in more natural habitats.

Hagenbeck was not content to just collect interesting animals for exhibit. He was also fascinated by native people, and in 1876, he sent a collaborator to Sudan to bring back both wild animals and a few Nubian humans.

The Nubians were exhibited in a zoo enclosure, same as if they were a wild animal, and their presentation was very successful in Europe.  Hagenbeck's Nubians toured Paris, London, and Berlin, with enthusiastic crowds coming out to see people from the Dark Continent.

Hagenbeck branched out.  A few years later he brought a group of eight Labrador Inuit to Europe and toured with them through Hamburg, Berlin, Prague, Frankfurt, and Paris before all eight died of smallpox. In 1889 Hagenbeck captured – with the permission of the Chilean government – 11 members of the Selk’Nam tribe, who were enclosed behind bars and exhibited across Europe.


"Human zoos" continued in Europe until the late 1950s, with African children exhibited at a human zoo in Brussels, Belgium as late as 1958.

The phenomenon was not purely European. The Cincinnati Zoo kept 100 Native Americans in a village setting for approximately three months, and a Congolese pygmy by the name of Ota Benga was displayed at the Bronx Zoo in New York City in 1906, forced to carry around orangutans and other apes while he was exhibited alongside them.

On Coney Island in 1905, at the Luna Park Amusement park, a group of Filipino tribes people were made to dance wearing only a g-string, and were encouraged to kill dogs, chop them up, and throw them into stew pots.


Many of the captured and displayed native people died of disease, but the final end for Ota Benga stands out for its great sadness:

[I]n January 1910, Gordon arranged for Benga's relocation to Lynchburg, Virginia, where he lived with the McCray family. So that Benga could more easily be part of local society, Gordon arranged for the African's teeth to be capped and bought him American-style clothes. Tutored by Lynchburg poet Anne Spencer,[29] Benga could improve his English, and he began to attend elementary school at the Baptist Seminary in Lynchburg.

Once he felt his English had improved sufficiently, Benga discontinued his formal education. He began working at a Lynchburg tobacco factory. He proved a valuable employee because he could climb up the poles to get the tobacco leaves without having to use a ladder. His fellow workers called him "Bingo". He often told his life story in exchange for sandwiches and root beer. He began to plan a return to Africa.

In 1914 when World War I broke out, a return to the Congo became impossible as passenger ship traffic ended. Benga became depressed as his hopes for a return to his homeland faded.  On March 20, 1916, at the age of 32, he built a ceremonial fire, chipped off the caps on his teeth, and shot himself in the heart with a stolen pistol.

He was buried in an unmarked grave in the black section of the Old City Cemetery, near his benefactor, Gregory Hayes.


One of the zoo keepers capturing and displaying native people was the Nazi zoo keeper Lutz Heck, who was instrumental in the creation of the Jadgterrier. Lutz Heck is show below (left. with beard) with an India family and an elephant he brought to Berlin for display in 1931. 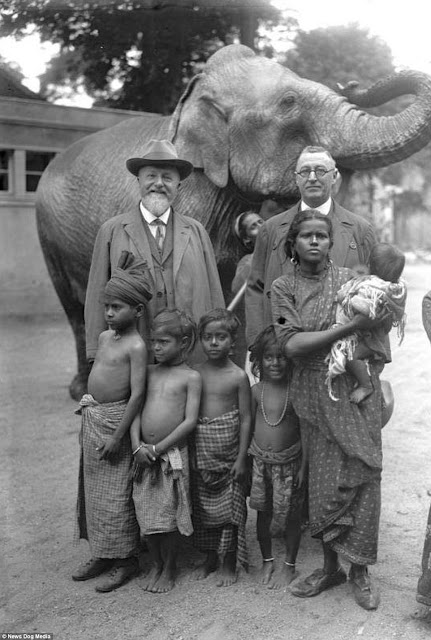