A Vegan Critique of "Sausage Party" 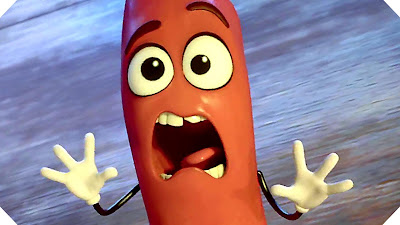 This paper provides a critical vegan reading of the comedy animation film Sausage Party (2016), directed by Conrad Vernon and Greg Tiernan and starring Seth Rogen and Kristen Wiig. Such a reading is situated within an emerging vegan studies framework (Wright 2015) that is sensitive to the reproduction of unequal power relations between humans and other species, but also how those power inequalities intersect with intra-human power relations along the lines of gender, sexuality, "race", age, class, different experiences of embodiment and so on. Sociologist Erika Cudworth argues that "[w]e need as full an analysis of social intersectionality as we are capable of, "so that the critical focus remains on "relational systems of power" (Cudworth 2015, 101). Cudworth (2011) also introduced the concept of anthroparchy, to signify the human domination of nature, with "nature" including but not limited to other animals. In that context, Sausage Party perpetuates anthroparchy, in so far as it normalizes the consumption of "animal products" for the audience. Those consumption practices are dependent on systems of production that are implicated in major environmental crises (Twine 2010), including mass extinctions, climate change, deforestation, water pollution and water scarcity, which might be summed up by Michael Fox's (2000) term "ecocide". Cudworth (2014) argues that a relational system of power comprises both ideas and beliefs as well as contextually embedded social practices. In this paper, we argue that Sausage Party provides an exemplary case study in the cultural reproduction of such an intersected relational system of power. It celebrates ecocidal, oppressive consumption practices at the same time as it reproduces ideas and beliefs, or social norms, of unequal relations between species, between genders, between the differently abled, and so on. This may be made clearer by situating the critique of Sausage Party in the context of recent research that may be broadly construed as operating within a vegan studies framework.

Oh my god, I never even saw this movie and this is hilarious. Who knew there were so many completely absurd 'grievance study' papers that actually survived peer review to publication?