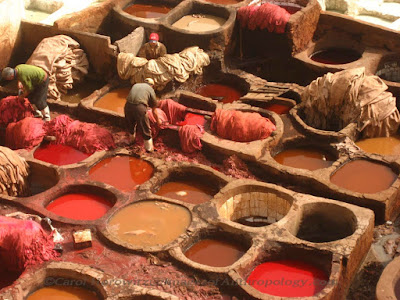 If you have been to Fez, Morocco, you may have seen the dye pits there -- over a 1,000 years old and carved into solid rock.

They secret to Moroccan leather is that the sheep and goat hides are softened in an alkaline mixture of feces and urine collected from both animals and people.  The soaking softens the leather and the alkaline water burns away the fat, sinew, and hair.

It seem the British tanneries of the Victorian era used the same system but prized dog shit above all other varieties.  "Pure Finders" of the era collected dog shit from the streets of London for resale to leather tanners. And guess what?  There was even a business in selling fake dog shit!

From the 1851 socio-demographic treatise, "London Labour and the London Poor” by Henry Mayhew comes this description:

'Dogs' dung is called "Pure," from its cleansing and purifying properties.

'The name of "Pure-finders," however, has been applied to the men engaged in collecting dogs'dung from the public streets only, within the last 20 or 30 years. Previous to this period there appears to have been no men engaged in the business, old women alone gathered the substance, and they were known by the name of "bunters," which signifies properly gatherers of rags; and thus plainly intimates that the rag-gatherers originally added the collecting of "Pure" to their original and proper vocation. Hence it appears that the bone-grubbers, rag-gatherers, and pure-finders, constituted formerly but one class of people, and even now they have, as I have stated, kindred characteristics.

The pure-finders meet with a ready market for all the dogs'--dung they are able to collect, at the numerous tan yards in Bermondsey, where they sell it by the stable-bucket full, and get from 8 d. to 10 d. per bucket, and sometimes 1 s. and 1 s. 2 d. for it, according to its quality. The "dry limy-looking sort" fetches the highest price at some yards, as it is found to possess more of the alkaline, or purifying properties; but others are found to prefer the dark moist quality. Strange as it may appear, the preference for a particular kind has suggested to the finders of Pure the idea of adulterating it to a very considerable extent; this is effected by means of mortar broken away from old walls, and mixed up with the whole mass, which it closely resembles; in some cases, however, the mortar is rolled into small balls similar to those found. Hence it would appear, that there is no business or trade, however insignificant or contemptible, without its own peculiar and appropriate tricks.

.... The kennel "pure" is not much valued, indeed many of the tanners will not even buy it, the reason is that the dogs of the "fanciers" are fed on almost anything, to save expense; the kennel cleaners consequently take the precaution of mixing it with what is found in the street, previous to offering it for sale.

'The pure-finder may at once be distinguished from the bone-grubber and rag-gatherer; the latter, as I have before mentioned, carries a bag, and usually a stick armed with a spike, while he is most frequently to be met with in back streets, narrow lanes, yards and other places, where dust and rubbish are likely to be thrown out from the adjacent houses.

The pure-finder, on the contrary, is often found in the open streets, as dogs wander where they like. The pure-finders always carry a handle basket, generally with a cover, to hide the contents, and have their right hand covered with a black leather glove; many of them, however, dispense with the glove, as they say it is much easier to wash their hands than to keep the glove fit for use. The women generally have a large pocket for the reception of such rags as they may chance to fall in with, but they pick up those only of the very best quality, and will not go out of their way to search even for them. Thus equipped they may be seen pursuing their avocation in almost every street in and about London, excepting such streets as are now cleansed by the "street orderlies," of whom the pure-finders grievously complain, as being an unwarrantable interference with the privileges of their class.

The pure collected is used by leather-dressers and tanners, and more especially by those engaged in the manufacture of morocco and kid leather from the skins of old and young goats, of which skins great numbers are imported, and of the roans and lambskins which are the sham morocco and kids of the "slop" leather trade, and are used by the better class of shoemakers, bookbinders, and glovers, for the inferior requirements of their business. Pure is also used by tanners, as is pigeon's dung, for the tanning of the thinner kinds of leather, such as calf-skins, for which purpose it is placed in pits with an admixture of lime and bark.

In the manufacture of moroccos and roans the pure is rubbed by the hands of the workman into the skin he is dressing. This is done to "purify" the leather, I was told by an intelligent leatherdresser, and from that term the word "pure" has originated. The dung has astringent as well as highly alkaline, or, to use the expression of my informant, "scouring," qualities. When the pure has been rubbed into the flesh and grain of the skin (the "flesh" being originally the interior, and the "grain" the exterior part of the cuticle), and the skin, thus purified, has been hung up to be dried, the dung removes, as it were, all such moisture as, if allowed to remain, would tend to make the leather unsound or imperfectly dressed.... 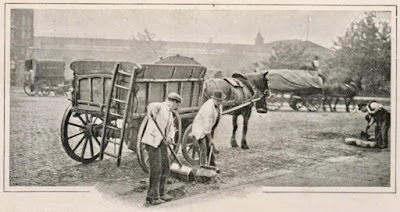