The Devils Bush Is a Friend of Terrier Work 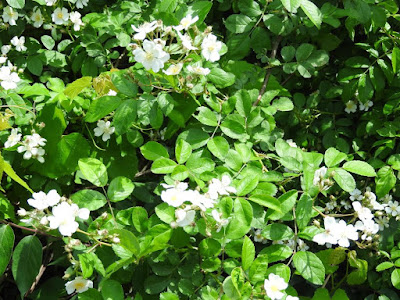 The multi-flora rose is starting to bloom.

I was at a conference a few years back, and it was hot inside the room. All the panelists had long since abandoned their suit coats, and I finally rolled up my shirt sleeves, exposing two arms lacerated by multiflora rose bushes the day before.

The gentleman next to me looked at my arms, raised his eye brows and asked: "You have a pet bobcat?"

Of course, the answer was no. It was just multi-flora rose bushes. There were two raccoons in a den underneath them, and a baying terrier down below as well.

I waved it off and made it sound like I had been planting out a lot of rose bushes in the back yard rather than hacking them down with a machete. You never know how a government lawyer from New York City will react if he finds you spend your weekends with dogs, raccoons and machetes. I have learned to let some mysteries be.

If you dig much in the eastern U.S., and you follow the dogs into hedges, as I do, then you are going to end up with a certain number of embedded thorns in your arms, hands, and shoulders. I even have one at the very back of my neck, right at the hairline, that seems to be permanent.

Some thorns work their way out, but a lot do not, and some end up going in so deep that skin closes over the top leaving a small hard knot on top. If the thorn went in at foot or hand, where the muscle moves a lot, it would work itself out quickly, or be pulled out quickly, but the ones that jab you in the forearms are more likely to remain if not found, and skin will eventually close over them if they are deep enough. You would think the body would eventually absorb them somehow, and maybe it does, but it takes months and months, and by then I have a few more thorns augered in, so the load seems to stay about the same.

Multiflora rose originated in Japan and was imported to Europe around 1862 to serve as a root stock for "rambling" roses.

Rambling roses became a craze with the creation of "Turners Crimson Rambler" in 1893, and this craze lasted for about 30 years until the modern, repeat blooming, large-flowered climbing roses were created.

The first multiflora roses to "go native" in the U.S. were rambling roses that originate during the rose craze of the very early 20th Century. In truth, these feral roses were not much of a problem.

The problem started in the 1930s and extended into the early 1960s as the U.S. Department of Agriculture and various State highway departments promoted multiflora rose as a "cure-all" for many public and farm landscaping problems.

In truth, multiflora rose did seem to be a good solution for a lot of difficult areas. Multiflora was cheap, easy to propogate from cuttings, and was rampant with vigor. Long, arching and pliable canes with thorns were perfect for shielding car lights from oncoming traffic, discouraging humans from entering fields or crossing roadways, and keeping cattle out of riparian areas.

Rose roots seemed to thrive in a large variety of soils, tolerated both drought and wet reasonably well, and they did a commendable job of stablizing creek banks and slowing erosion on slopes. Rose hips were also eaten by a wide variety of song birds and animals, providing a needed food source in winter.

The U.S. Department of Agriculture and its various state analogues vigorously promoted multiflora rose as a low-cost alternative to barbed wire. Barbed wire had made its way East several generations earlier after first being established in the West.

Unlike western wire, which was typically strung from post to post, eastern wire was often strung from existing trees around the edges of woods, creeks and fields. In time, these the trees grew and absorbed the wire into their trunk. Embedded wire was difficult to remove and made the trees worthless as timber since wire and nails wrecked commercial saw blades and had the potential of turning a chainsaw into a lethal weapon.

Like so many good ideas, the promotion of multiflora rose has unintended consequences. A mature multiflora rose bush can put out half a million seeds a year, and these seeds are easily spread by birds and can live in the soil for 10 years or more.

Farmers found that getting rid of a rose hedge required ripping it out with a bulldozer and then plowing and mowing the areas multiple times a year for several years in order to destroy the existing root and seed stock in the soil.

Next time you find yourself digging a hole in the middle of a multiflora rose bush with broken barbed wire snaking along the ground, remember that these stabbing obstacles are, in a very real sense, a significant player in the vigorous return of wildlife we see in in the Eastern U.S. today. Though they may be the enemy of the moment, they are the long-term friends of terrier work.

My understanding is that roses and blackberry plants are related. I've got 2 rose plants in my front yard that refuse to die. I've had them cut back, dug up and not watered. Ever. We had some severe drought in CA, and nothing has prevented them from coming back. The local blackberry plants are the same. Your description of the multiple ripping out of the roots of the multiflora reminds me that there are canes shooting up again. Time for the flame thrower.

... this reminds me of a question that has passed my mind a couple of times, reading your blog: What's your take on tetanus and the vaccine? Scratches, thorns, dirt, animals... Seem like an invitation. I know I sort of don't care -because I haven't found evidence in reading and am still alive. But maybe I am just crazy.

Multifloras are great -have a thornless version on my balcony. The thorny ones are well taken care of by certain hardy small horses who eat them into the ground.

As for embedded thorns... the same goes for the sucking tool (don't know the right name) of the tick. But they will keep bothering even after years. Very annoying.