Why do we call places that kill dogs ‘shelters’ or ‘rescues’?

Like so many things, the answer goes back to the Victorian era.

The goal back then was to eradicate rabies, and the most obvious place to start was to round up all the stray dogs and kill them as quickly as possible.

Pet dog owners were instructed to always have their dogs muzzled, and to never have them off leash, which meant any dog found un-muzzled or off-leash was fair game for the dog catcher.

In the U.K. and in the U.S., dog catchers and dog pounds were subsidized by taxpayer funds, and budgets were always thin. Pound operators were told to keep overhead costs low or risk cutting salaries, and the simplest way to do that was to rush dogs to their death, thereby lowering food and staff costs.

And so, within a week of being caught, most stray dogs were summarily shot, gassed, clubbed, or drowned in wire cages shoved off the dock.

The good news is that rabies was eradicated from the U.K. by 1903. The bad news is that by then dog pounds were institutions with budgets, employees, real estate, and a fully developed ethos. Animal welfare had become a social cause and a business, and while improved treatment of horses and cattle was a concern, it was the plight of dogs and cats that really opened up the purses.

Of course one had to treat the issue gingerly! One could not be raising money to help subsidize a canine slaughterhouse, and so a new term was coined – a ‘shelter’ or “rescue’. Let people guess what actually happened there!

It should be said that from the beginning the ‘humane movement’ and the Kennel Club had a detente.

The Kennel Club did not decry the movement for pocketing taxpayer money for killing hundreds of thousands of healthy dogs, while the humane movement did not criticize the Kennel Club for encouraging the breeding of pedigree puppies. Both groups recognized that they were trying to milk the same group of upwardly mobile middle class and high-value donors, and both found it convenient to pitch their messages along class lines. Better people had pedigree dogs, while loose mutts and cross-breeds were the unfortunate canine flotsam cast up by the actions of the ignorant and the lower class.

In fundraising appeals, the humane movement always suggested that more money could ‘save’ a dog or a cat down at the ‘shelter” or ‘rescue,’ but the mechanics of such an operation were always vague, and for a very good reason; only a small percentage of money was ever spent on dog and cat welfare. Instead, the large humane organizations became almost pure legislative and political organizations. Stray dogs and cats? That was the job of the City pound, and never mind if that job involved endless killing.

If a consumer actually wanted to get a dog from the pound, of course, he or she had to cross the railroad tracks, pass by the town dump, and go down a dirt road or trash-strewn street to a nondescript building. There they would find a double row of cages filled with barking dogs. Each of these dogs had only a few hours or a few days to live before they were to be shot, gassed, drowned, or injected. If you wanted a particular dog, it was best to take it with you now!

Of course, the average person looking to get a pet for their child never considered subjecting them to the horror of such an experience. Instead most picked up an all breed book, flipped through the glossy pictures and romantic canine descriptions, and then thumbed through the local newspaper and dog magazine advertisements to find a breeder. Then, on a Saturday afternoon, the family headed off to a house or farm where cash was exchanged for a wiggling eight-week old package of fur.

What about the dogs at the pound, which had now been rebranded as a ‘shelter’? Out of sight and out of mind, they were dead and on the land fill.


THE GOOD NEWS IS THINGS ARE CHANGING:

The good news is things are changing.

In the last decade or so, the world of dog shelters has changed, and it is still changing.

To start, people have come to understand that the big direct mail organizations do very little at the local level to help shelter dogs and cats. If you are interested in helping those animals, stay clear of the national organizations and give to a local shelter where you have some chance of knowing where the money actually goes.

Second, the shelters themselves have come to realize that they need to be in the ‘sales” business. To that end they are creating more “store front” rescues and shelters which are less depressing and more attractive to young families with children.

Third, the social cues we now give each other about pedigree dogs and about cross-breeds have changed. While pedigree dogs were once seen as a sign of an upscale and informed consumer, the message going out now is that pedigree dogs are more likely to be expensive, inbred health messes, and ownership of such dogs is more likely a sign of pretension than sophistication.

Fourth, more and more people are spaying and neutering their dogs, and fewer unaltered dogs are running around at large. As a consequence, the number of unplanned litters has dropped remarkably in the last 20 years.

Fifth, the Internet has made it easy for shelters and rescues to post pictures and descriptions of available dogs online, where people are free to look through them without the terrifying emotional pressure of going to a shelter and choosing one among a hundred to save.

All of this is terrific news, and a true sea-change in the world of dogs.


THE BAD NEWS ABOUT STAFFIES

The bad news is that while things are generally looking up for shelters dogs, that is not true for ‘Staffordshire Bull Terrier types,’ -- what we in America call ‘Pit Bulls’.

More Pit Bulls are killed in U.S. shelters every year than ALL dogs registered by the American Kennel Club and the United Kennel Club combined.

But it's not just an American story is it?

That's more dead dogs of a single type at one shelter than the total number of Neopolitan Mastiffs, Pekingese, Chinese Cresteds, Portuguese Water Dogs, or Boston Terriers registered by the Kennel Club that same year.

And why are so many "Staffordshire Bull Terrier types" put down?

Simple: Because no one wants them.

What happens next, however, is all too predictable: about half of these dogs end up on death row because they prove to be too much for their owners.

What is the dog writing community, saying about all this?

The silence is pretty deafening.

And why is that?

Mostly it’s because folks who talk about “the Staffie problem” end up being aggressively bullied whenever they raise the issue.

"Blame the deed not the breed" the apologists for death wail.

But they don't mean the deed of actually breeding these dogs for cash, do they? 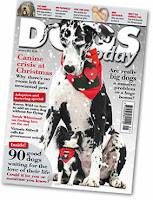 No, that's a sacred cow.

Talk about a ban on advertising these dogs for sale, and suddenly there is no concern at all about the dogs.

They offer up no solutions for them.

In the world of Staffies, at least, it’s capitalism that is being defended, not the dogs.

I've been dog-shopping at shelters in the past few months, so I've been in at least 1 shelter a week for the past 12 weeks. They are all close to 100% pit bull. Even the private shelters which are using the southern transport operators to bring up dogs from rural Georgia, Alabama, etc., are frequently mostly pit bulls. There is no region left which does not have a massive oversupply of pit bulls. The shelters will fudge the ones that they can - do you know there are a huge number of intact Vizlas running around out there having unwanted puppies? And that the term "hound" can mean whatever you want it to mean? - but it's pretty clear that the public has largely caught on because these animals sit and sit and sit and sit. The other breeds move within a week, unless they have some huge temperament or physical issue. The pits sit. Even the puppies sit. I saw an offsite shelter adoption event at a pet store; the shelter brought 2 litters, 1 clearly not pits and 1 pits. There were tumbleweeds blowing through the pit litter's x-pen. You could barely see the other litter.

But pit bull owners are worried about breed-specific legislation.
If I walked into shelter after shelter, and saw kennel after kennel occupied by the kind of dog I love most in the world, many of them destined for either euthanasia or limbo in some rescue group's long-term foster care, I'd be demanding BSL for my breed. Anything to bring the supply back in line with the demand.