In 1895, Edwin Hautenville Richardson learned that the German army was buying large quantities of British collies for military service. He did not think too much of it at the time.

Richardson went on to marry fellow dog lover Blanche Bannon, and the couple bought land on the east coast of Scotland to start breeding and training dogs of their own. Officers at the nearby Barry Buddon army camp took an interest in their work, and they let Richardson work his dogs with the soldiers.

The British War Dogs Training School at Shoeburyness, Essex had started, albeit without any fanfare or notice.

When World War I broke out, Richardson promoted the use of dogs for locating the wounded and carrying bandages out to remote parts of battlefields. In order to stock up on dogs quickly, and on the cheap, Richardson turned to the Battersea dog rescue where many former former pets had been turned is as people beset by war found they could no longer care or feed for them. Richardson was originally looking for lurchers, but he eventually decided the Airedale was the perfect dog for military needs.
Richardson's Airedales were used in both World Wars to find the wounded and carry medicine out to the injured, to carry messages, as guard dogs, and even to pull gun and barbed-wire laying carriages. 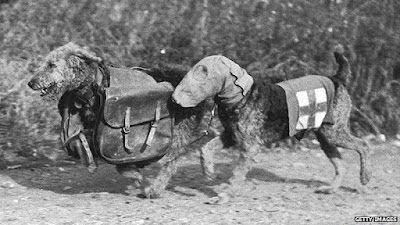 The core trick that Richardson taught all dogs, was to go from point A to point B and back, as most dogs ended up being used as messenger dogs. In order to do the work, the dogs also had to be acclimated to gun fire, debris, and vehicle traffic. 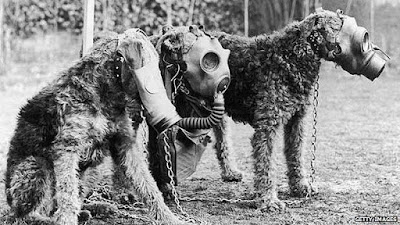