What Are Kennel Clubs About? 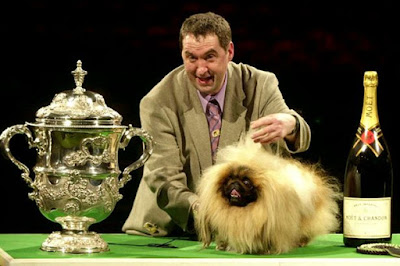 Pete Wedderburn writes in The Telegraph:

Pedigree dogs are man-made entities. Just as humans take the glory for the beauty and health of the best of them, so we ought to take responsibility for their downsides. And, as the self-proclaimed “UK’s largest organisation dedicated to protecting and promoting the health and welfare of all dogs”, the Kennel Club should be at the fore of accepting that responsibility.

Yet this year, the most vocal public reaction to Crufts has been justifiable anger at Kennel Club indifference to the stated goal of health and welfare. There were two clear examples of this indifference, each representing a different aspect of preventable illness.

First, poor physical appearance, when Best in Breed was awarded to a German Shepherd with a bizarre, low-slung, slopey hind quarter gait that seems to be a fad currently favoured by breeders and judges. Any vet will tell you that German Shepherd dogs are plagued by hind quarter issues as they grow older, from dodgy hips, to lumbo-sacral disease to a degenerative nerve condition affecting the back legs. The deliberate distortion of the breed norm towards a slinky, scuttling rear movement is unlikely to help these issues. Crufts should only reward dogs with the healthiest physique. Does anyone outside German Shepherd circles really think this type of distorted shape should qualify?

Second, poor genetic make up. Even when pedigree dogs appear outwardly physically healthy, they often carry a tendency towards hereditary disease. The Cavalier King Charles Spaniel breed is afflicted by two serious health problems: heart valve disease (affecting 90 per cent of dogs by the age of ten) and syringomyelia, a painful brain-related disease (affecting over 70 per cent of the breed). Scientists have established that to deal with these issues, Cavaliers should not be bred until they are at least two and a half years old, after being tested for these two diseases. Yet, astonishingly, Best of Breed at Crufts was given to a dog that had been used for breeding by the age of nine months, and online records show that this was before any testing had been carried out. If the Kennel Club seriously cared about dog health, they would only agree to register Cavalier puppies from dogs that had been tested, and they certainly would not reward breeders who flouted best practice.


Right on all points, and the points have been made again, and again for decades.

So why no change?

Kennel Clubs are not about dogs.

It's not the dog that obsesses about registration papers, buys a motor home, drives 400 miles to a show, and pays for hotel.

It's not the dog that puts up registration fees, pays for a professional handler, or wonders whether they have the right outfit for this judge and that group.

Dog shows and Kennel Clubs are not about dogs -- they are about people who have lost the plot on their own lives, and are chasing ephemera and ribbons in order to find status in their already-disappointing lives.

Dog shows and Kennel Clubs are not about dogs -- they are about demonstrations of conspicuous consumption from people who have only recently clawed themselves up from the working class, or who are still trying to do so.

Never and in no way. Not now, and not ever.