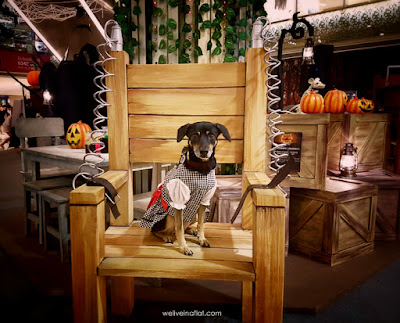 Thomas Edison used to electrocute dogs as part of a sales campaign. From Executed This Day:

On this date in 1888, a 76-pound Newfoundland was electrocuted before a crowd in a lecture hall at the Columbia College School of Mines (now the School of Engineering and Applied Science at Columbia University) in New York City. The pooch was an innocent bystander who’d fallen victim to the War of Currents between Thomas Edison and his electrical adversary, George Westinghouse.

In the late 1800s, as electrical systems were spreading all over America, Westinghouse’s company and Edison’s company were duking it out as to which system would prevail over the other. Westinghouse’s AC, being far more efficient, was usually the system of choice for providing electricity to houses, businesses and streetlights, which was where most of the profits lay. (DC was better for things like batteries.)

Desperate to hold onto eroding market share, Edison saw an opportunity to do Westinghouse dirty when New York State adopted the electric chair as their means of execution. Some notable botches had rendered hanging unpalatable, but industrial electrification was still such a newfangled concept that at the time the law was passed, the chair had yet to be built. Edison figured that a propaganda blitz to make sure the device used AC would help convince the public that the rival current was too deadly to be used in private homes and city streets.

Edison hired Harold P. Brown to help him demonstrate the danger of alternating current.  It was Brown who scheduled a demonstration at Columbia in which he placed a muzzled 76-pound Newfoundland dog in a metal cage. Electrodes were then attached to one foreleg and one hind leg. Brown connected the dog to the DC generator Edison had loaned him, and started with 300 volts, gradually increased to 1,000 volts as the dog yelped and howled in pain, but remained alive.

Having proven the "safety" of direct current, Brown disconnected the dog from the DC generator and connected it to the AC generator, noting “We shall make him feel better.”

Brown then turned the voltage to 330, and killed the dog.

Topsy had belonged to the Forepaugh Circus but spent the last years of her life at Coney Island's Luna Park. She was deemed to be dangerous because she had killed one trainer who had burned her trunk with a lit cigar, and was aggressive towards two others who had struck her with a pitchfork,

Topsy was killed by electrocution on January 4, 1903 at the age of 36.  Her electrocution was witnessed by an estimated 1,500 people.

Topsy was also the name of a killer elephant with Ringling Bros, when I worked in the animal tent in the summer of 1971. All the others were friendly, but we were warned to stay away from Topsy. At the Cow Palace in San Francisco, a local security guard found out the hard way, as he walked too close and Topsy picked him up and threw him against the wall. He survived, but just barely. It's a stretch, but I think this may be a little bit of coincidental karma/reincarnation. Ha!

Times change. Bear baiting was still considered entertaining in those days as was a public hanging. Electrocution of a dog wasn't a big deal.

I had to look this up. The last public hanging in the USA was in 1936. Estimates of 15-20,000 people showed up. But lynchings continued for many more years. Bear baiting is still practiced in South Carolina according to Wikipedia.
Human cruelty should not be underestimated.