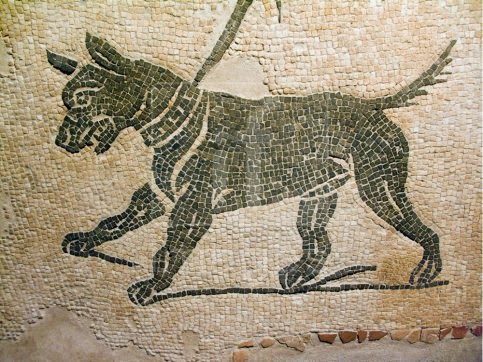 Cynegeticus is a treatise written in 400 BC by the ancient Greek philosopher and military leader Xenophon. The title is usually translated as "On Hunting" or "Hunting with Dogs."

A free translated copy is available here (all hail the Internet!) translated by H. G. Dakyns and published in 1897.

Xenophon suggested that there was a science to choosing and naming a dog, and that the the best names are short, one or two syllables words that can be called easily, and which suggest the vitality and prowess of the dog.

The young hounds may be taken out to the chase at the age of eight months if bitches, or if males at the age of ten. They should not be let loose on the trail of a hare sitting, but should be kept attached by long leashes and allowed to follow on a line while scenting, with free scope to run along the trail.

Other dog names suggested by Xenophon:

I often give my dogs a name that describes them. Hence I have had a Shorty, Blackie, Rusty, Blue, Scruffy, Toothpick, Woolly Booger, and most recently Whitey.

I like the Gnome- Maxim juxtaposition at least as far as JRTs. Gnome= "earth dweller" in ancient Greek and Maxim means "the greatest". Pretty much sums up the little dogs...