Thoughts About Dogs at the Virginia JRTCA Trial 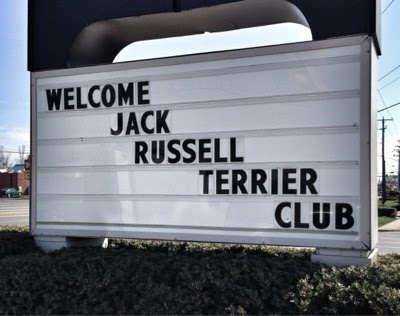 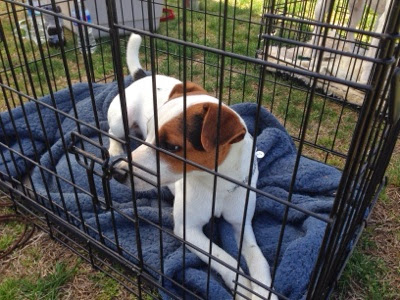 I attended the Virginia JRTCA "Spring Fling" trial in Fredericksburg on Saturday.  What should have been a one hour drive took three hours due to ridiculous traffic on I-95.  Ah well, we got there in the end, and that's the main thing.

I chatted up a few new people, met some old friends, saw three or four small dogs, saw a lot of very nice looking dogs, and generally realized I am getting old.

A lot of the kennels and the dogs I used to know are gone -- the dogs dead, the people no longer about. That said, it was a beautiful day and it helped to remind me of what I like in a dog. No, what I like is not as common as a blade of grass -- it is specific to the work I do and the land I hunt on, and yes it reflects a few completely unreasonable prejudices as well.

Small is absolute, smooth or lightly broken preferred, a little body color would be ideal.  Not too many dogs fit the bill!  But did I see three or four?  I did. So there is hope, if not a solid prospect immediately in orbit.

On the upside, casual conversation suggested people are hunting, even if most of the dogs I saw on the ground did not look like they had taken too many punches. That said, a lot of the dogs were pretty young, and it is possible for a dog to dig quite a bit and still not look like bad taxidermy after three or four seasons. Teddy M. reminded me, some years back, that the hunting gene does not wash out with the first wave on the beach. Sure, this particular generation might not have hunted too much or at all, but it's not like the breeders were selecting against hunting is it?  She's right, of course, and that's something to remember. Read the pedigree. It does not tell you everything, but it will tell you something if it's a JRTCA pedigree:  size, hunting certificates earned and turned in (note: my own dogs do not have a hunting certificate on anything).

I stopped at one pen that had four small dogs. How old?  One was two years old and the other three were about four months old and out of two litters. A strong stamp on all of them. I said they were marked a bit like Hart Farms Bruno and Isaak and Nevaar. No doubt that was mostly accidental, but yes the dogs were Bruno grandsons (Sailor was out of Bruno, and Mountain Girl and Sailor both had Bruno's father, Beano, as their grandfather).  The 2-year old bitch looked to be 11 or 11.5 inches. She's about to come into heat, and the idea is to cross her with an 11.5 inch tri-colored male with nice body color.  I made notes and said I would send an email. The kennel is very far away, but small dogs are not as common as mangoes in May.

Another looker on deck is currently in whelp. She's a very flashy little 12.5" tricolored bitch, close by, and owned by a regular reader of this blog.  The dog is very attractive and the sire of this litter is a 12.75" worker, and is apparently throwing pretty strong stuff.  Am I interested? Yes!  But might the pups be too big.  Yes too.  All doors open.

Other dogs are out there for consideration -- a few older dogs, some with the "wrong" coat or perhaps a little big, but proven workers. There is the rescue dog that I put out a note on, but I have not heard back about, probably because he has not yet be transported to this area.

In the end, I may need to add two dogs and let Mountain Girl teach the news one and then retire her as she will be ready by then. I am mulling this over, and I have not told the wife of this plan.

I have always had three terriers.  It was OK to be down to two, but now that I am down to one old dog, I may need to think anew.
. 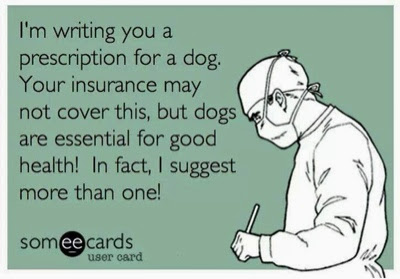 Dear Patrick,
Sorry but I need to disagree with your friend. "Teddy M. reminded me, some years back, that the hunting gene does not wash out with the first wave on the beach. Sure, this particular generation might not have hunted too much or at all, but it's not like the breeders were selecting against hunting is it? She's right, of course, and that's something to remember'"

Some genes are more persistent than others and "hunting" broadly defined is one of canis familiarus'
characteristics. But heart/gameness is probably far more genetically fragile and if I understand your dogwork that's a must have.

You get what you breed for and very soon, (in sheepdogs perhaps three generations) you start losing the unique genetic combo that was the working sheepdog or, I'd guess, the working terrier.

Show people believe that while they're busy breeding for coat or chest size or typiness, the working abilities are still there in some genetic vault. They don't understand how complex and poorly understood working genetic combinations are and by emphasizing - say - nose length, show people may be simultaneously breeding against one or more working attributes.

No, I can't cite a specific instance. The genetics aren't understood. What I know is that the only way to breed a working sheepdog and get a high percentage of working sheepdogs is to breed them for that work AND NOTHING ELSE. I know this because breeders who do so produce excellent working sheepdogs and nobody breeding for any non-working criteria can or has.

The sheepdog trial is open to any breed (or unknown) any age, any sex, any papers or none.

In thirty years I have never seen nor heard about one dog that could compete creditably in this test that had not been bred for stockwork. Not one. No Shetland Sheepdogs, no Bouviers, No Belgian Sheepdogs, No Old English Sheepdogs, no Lassie Collies, no . . .

And I would be willing to bet that working ability is as necessary with terriers willing to go into an animal's den, underground, far from help, directly into that animal's teeth, anger and desperation.

Buying a dog for dogwork that doesn't come from working parents is betting against the odds. Yep, you might just win. You also might break the bank at MonteCarlo.

I am curious as to your mention of the kennels and terriermen that are gone now. Is the number of people interested in hunting with den terriers declining, or are younger people taking up hunting to replace those gone?

I think the gross numbers are about the same, but people get older, their homes get colonized by much-loved dogs that are now too old to win at the shows, etc. A lot can change in 15 years. On the upside, I think there may be few more hunting and a few more with smaller dogs. Hard to know exactly. The entry of the AKC into the Parson world may have taken a number of non-workers and larger dog with them. Just a sense...,