Kennel Mentals: the Problem No One Talks About 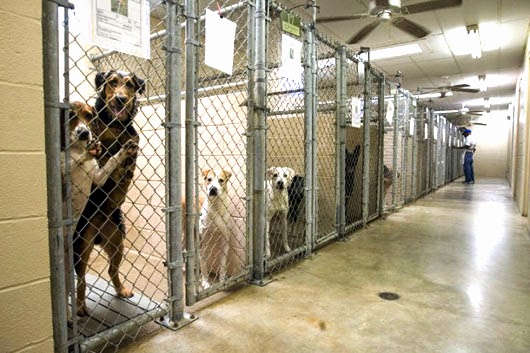 These are the dogs that pace back and forth in an X-pen, or who look stoned or stunned when offered a finger or a pat on the head.

I know what's wrong with these dogs, and so does everyone in the world of dogs. These dogs are "kennel mentals."

Now a new study by researchers from the University of Bristol’s Anthrozoology Institute say that even well-trained police German Shepherds show tell-tale signs of extreme stress and even temporary mental illness when kenneled.  Hamish Denham, the study’s lead author, video taped 30 police dogs repetitively jumping and bouncing off walls, pacing back and forth, spinning, and walking in circles around the perimeter of their pens.  Kennel mental.

The study notes that “some dogs may find isolation from humans particularly aversive, hence affecting their reactions both to being left in a kennel and to being taken to the veterinary surgeon.”

A lot of breeders will not sell their whelp to those who kennel their dogs, and I understand why; it's simply too easy to acquire 20 dogs and feed them and shelter them, and water them and blast the poop out of the kennel with a power washer, and do noting else.  Is it possible to take those same 20 dogs out of their kennels twice a day and exercise and play with them? Nope!

As I have said before, dogs are not shovels or shotguns that can be hung in the closet until used. They are sentient animals with active minds, social needs, and physical requirements that far exceeds food, water, shelter, and basic hygiene.

[I]f you kennel your dogs twenty-four hours a day, seven days a week, you are failing your dogs. In fact, you are treating your dogs worse than the most hardened of psychopathic criminals on death row.

And yet, how often do we see this? All the time!

Go to any commercial breeding or long-term boarding kennel, and you will see cage after cage of dogs deprived of the most basic kind of mental stimulation. Most are rarely walked or even turned out from their cages. Instead, a high-pressure water hose is used to blast feces into the scuppers. The gate to the kennel run may not be opened in a week

This is not a life. This is abuse.

“Abuse?! But that’s the way we’ve always done it!”

Slavery and torture are also ancient traditions, but that doesn’t make them right does it?

We need to do better than this.

Dogs are not inanimate property. If you leave a shovel out in the rain and snow, it is of no concern to the state. But do the same thing to a dog, and not only will the state step in – it may fine you, remove your dog and, in extreme cases, jail you.

While there may be no legal obligation to provide exercise and mental stimulation for your dog, failure to live up to this responsibility is at the core of many, if not most, dysfunctional relationships.

Job One then is exercise and mental stimulation. Satisfy your dog’s needs in this regard, and you are half way home.


Of course, to be charitable, this is all easily said but in the real world, there is a need for boarding facilities, rescues and (yes) even large breeding facilities. As with so many thing, the good and the bad have to be put on a scale to see how the weight shifts with differing values. ?

Is it better to kill 5 dogs a day at a rescue, or to house 100 dogs for periods of anywhere from 7 days to two years or more?

Does a week or two at a boarding kennel while an owner is on vacation do any serious psychological harm?

Isn't it better for a breeder to have enough diversity in the kennel to avoid inbreeding and to improve stock through careful selection than to simply cross Ella with Elmo again and again because those are the two dogs that happen to be nearest at hand?

Yes, no, and probably are the obvious answers.

And yet, this issue of the "kennel mentals" is very real isn't it?  And is it a big deal in the world of dogs?  It is.  And are we talking about it very much?  No, we are not.

I often wonder about the dogs at
"no kill" shelters that spend the rest of their life kenneled. I think about dogs who spend 12 hours a day in their crate and then are put in again at night.
Then, I think about the phrases "Dogs like being crated," and "We are a no-kill shelter," and find myself amazed at how wrong we people get it at times.

Heather H. notes that in the modern era, there's no need to keep a lot of stud dogs around as it's easy to find a suitable mate, get your girl there, or even create a "pupsicle" (my term) through artificial insemination. Cheaper to send a dog or AI a dog that to raise one! And yes, she IS right.

A while ago (before the pitbull population explosion) London's Battersea Dog's Home's biggest problem was Border Collies. Brand new state of the art facility, trainers for the dogs,some needy dogs stayed in the staff offices - couldn't get much better. But the Border Collies were hard to place and after a year or so kenneled, they simply gave up, got opportunistic diseases and died.

In the UK, most working Border Collies live chained individually in stalls in the barn, 23/7 unless they're working, training or trialing. Long periods of "kennel" time.

But. I never visited a shepherd, no matter how hard-handed or rude who didn't walk his dogs twice a day every day, no matter the weather,NO MATTER WHAT.

My dogs are house dogs but the "kennel" dogs I saw were sane and happy.

To some extent it depends on kennel design. Battersea's were open plan so the dogs could see other dogs and alert constantly. The dirt floored, isolated barn stalls suited dogs better.

But the sanity preserver was that off-lead pack walk, half an hour twice a day, sometimes after the pub closed.