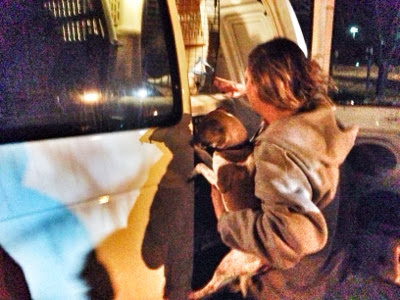 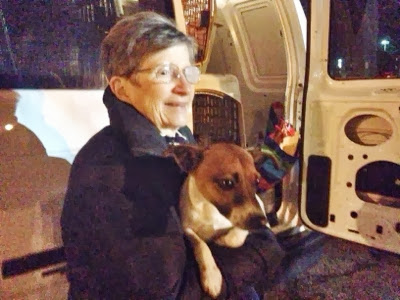 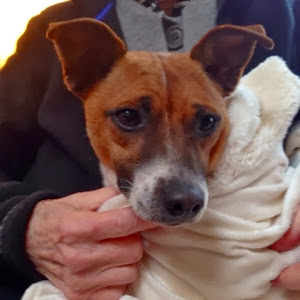 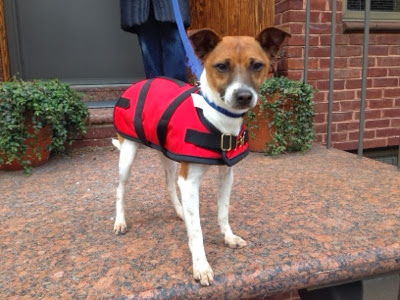 Darwin came off the truck Friday night, rescued from a kill shelter in North Carolina and riding a white cargo van stacked with crates up to Virginia, where he was transferred into the waiting arms of my mother.

The connection was immediate, with Darwin (the name the rescue gave him, which he is keeping) settling quietly into her lap on the ride back to the city. Two baths later, and the next morning Darwin was in splendor in his new coat on the front stoop.

Darwin is said to be two and a half years old, and is of pedigree unknown, but clearly a Jack Russell type. A quiet dog, he is confidently submissive, loves to use his nose, gets along with other dogs, and likes to cuddle. There is no hand shyness or aggression in him at all. He tips in at 13 pounds, and has long straight legs and a nice reddish brown saddle and spots.  More to be revealed, no doubt, but so far a total winner.

Darwin joins Marley the Italian Greyhound in our extended family of dogs, another rescue, this one from a West Virginia kill shelter.

Marley and Darwin are products of the rescue vans, which are a wonderful development in recent years. These vans shuttle dogs from rural pounds and kill shelters (an oxymoron if there ever was one!) to cities and suburbs where they have a much higher chance of being fostered and adopted.

An earlier Dachshund-Westie cross that my mother took on trial (despite a skin issue) was very gentle and a lovely dog but proved to have legs too short to get up on the couch or climb the open-backed stairs (it's a three story house) with ease. The good news, is that this dog was rehomed to someone else within the week.  Cute small dogs without temperament or serious health issues move out of rescue very quickly in this area -- one reason the rescue van idea works so well.
.