Win the Debate With Truth 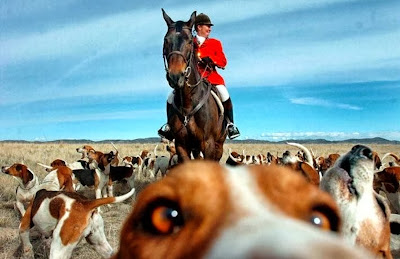 Brendan O'Neill gets it right in The Independent:  When you are an advocate for a cause (and I have been a professional advocate for causes for more than 30 years), always be straight.  Use the facts and do not embrace nonsense arguments.  If you cannot win the debate with truth, then the debate should be lost.  Next time, pick the right side.

On the issue of fox hunting, O'Neill writes:

I wish fox hunters would be more honest about why they want their sport unbanned. They're calling for the relaxation of anti-hunting laws on the grounds of "pest control", claiming there is a "growing threat to lambs from a rising fox population". Apparently this is why they need to don their fancy red jackets, put on their velvet helmets, get together 20 or 30 dogs, and ride through the countryside blowing a horn – so that they can control the numbers of lamb-mauling foxes. It doesn't add up. What an expensive and OTT form of pest control. I once had pest-control people around my house, to get rid of some mice, and I don't recall them wearing outlandish uniforms or making a sporting spectacle of their hunt for the dastardly vermin lurking behind my skirting boards. Pest control is a discreet activity, designed to get rid of a pesky creature with a minimum of fuss, not a hot-blooded, adrenalin-pumping chase.

Be straight with us, fox hunters – the reason you want the laws against hunting with dogs to be relaxed is not because foxes are a terrible pest, but because fox hunting is fun. Rollicking, raucous fun; a thrill; a brilliantly heart-enlarging, mud-spattered day out. That’s fine. It really is. If you were to put this case, to make an unapologetic argument for the right of you and your community to do something that electrifies the soul, which is fun, I would back you. We live in depressingly killjoy times, where anything that has a whiff of joy about it is liable to find itself banned or demonised – binge-drinking (having four pints!), reading saucy magazines, taking cheap flights, smoking at a bus-stop, having a bottle of Heineken on the Tube, chanting naughty things at football matches. In such a cheer-allergic era, I’ll stand with anyone who fights for his right to do fun stuff, stuff that is harmless to other human beings and which fills its practitioners with the fleeting elations of life. So ditch the pest-control blather, please, and admit that you miss the pleasures of pursuing wily foxes across fields and hills.

One of history’s cleverest Leftists, Friedrich Engels, knew very well the thrill of fox hunting. Unlike today’s humourless, larks-free Leftists, with their cretinous belief that the “rights” of a dumb canine should take precedence over the traditions and joys of actual human beings, Engels knew joy when he experienced it. He wrote about how fox hunting delivered him into “a state of devilish exhilaration for several days”. "It’s the greatest physical pleasure I know", he said. If fox hunters were to stand up and say something like that, to descend on parliament to demand their age-old right to experience devilish exhilaration, I’d have far more respect for them, and I expect others would too. But instead they unconvincingly use animal rights-style arguments for bringing back fox hunting, claiming it is a useful way to protect poor little lambs – not realising that in doing so they are making massive concessions to the idea that the main concern in the fox hunting debate should be what is good for animals. It shouldn’t. It should be what is good, and fun, for human beings.

Labour’s ban on hunting with dogs, and the excitement it brought to Leftists across Britain, was one of the historic low points of Left-wing politics. Bereft of any grand vision for transforming society, lacking ideas for how to create the old Left-wing goal of full employment, desperately missing the streetfighting class clashes of yesteryear, the Left in the 1990s opportunistically declared a phoney, panto class war on red-jacketed toffs instead. It was a displacement activity of epic proportions, miserabilism and killjoyism dolled up as class conflict. To my mind, the problem with hunting foxes with dogs is not that it was cruel but that it was too exclusive. Only the wealthy could experience this devilish exhilaration. If we unban hunting with dogs – and we should – then we should also develop schemes to allow inner-city youth and other disadvantaged people to partake in this sport, perhaps on government-funded daytrips to the country. Think of the invaluable life skills they would learn: horsemanship, daring, bravery, commitment, teamwork, drive. Instilling those values in a new generation, celebrating those values and the fun that frequently attends them, is infinitely more important than the life of a fox.


Without waxing as poetic, or writing nearly as well, I have detailed the true nature of mounted hunts and their relationship to fox; it is not as people think. In the U.K., and around the world, no one has done more to preserve and protect red fox than the mounted hunts. This is an important, and true, talking point that Mr. O'Neill omits, but then again he was not trying to make a comprehensive case for legalized fox hunting -- he was simply saying that people do not devote their weekends to it because it is miserable, and admitting that as a primary reason for much of the passion is a good way to start a conversation.  Truth is not a lesser value.  And lying is no way to win an argument.
.