The Quickest Way to Gun Control

THE QUICKEST WAY TO GUN CONTROL is if black folks and Hispanics "Open Carry" handguns to their State Capitols and loiter near the parking lots where state and federal legislators and their staffs park their cars.

A really smart gun control group would organize this to make this happen.

The eighth-grade students gathering on the west lawn of the state capitol in Sacramento were planning to lunch on fried chicken with California’s new governor, Ronald Reagan, and then tour the granite building constructed a century earlier to resemble the nation’s Capitol. But the festivities were interrupted by the arrival of 30 young black men and women carrying .357 Magnums, 12-gauge shotguns, and .45-caliber pistols.

The 24 men and six women climbed the capitol steps, and one man, Bobby Seale, began to read from a prepared statement. “The American people in general and the black people in particular,” he announced, must:

take careful note of the racist California legislature aimed at keeping the black people disarmed and powerless Black people have begged, prayed, petitioned, demonstrated, and everything else to get the racist power structure of America to right the wrongs which have historically been perpetuated against black people The time has come for black people to arm themselves against this terror before it is too late.

Seale then turned to the others. “All right, brothers, come on. We’re going inside.” He opened the door, and the radicals walked straight into the state’s most important government building, loaded guns in hand. No metal detectors stood in their way....

... The Panthers’ methods provoked an immediate backlash. The day of their statehouse protest, lawmakers said the incident would speed enactment of Mulford’s gun-control proposal. Mulford himself pledged to make his bill even tougher, and he added a provision barring anyone but law enforcement from bringing a loaded firearm into the state capitol.

Republicans in California eagerly supported increased gun control. Governor Reagan told reporters that afternoon that he saw “no reason why on the street today a citizen should be carrying loaded weapons.” He called guns a “ridiculous way to solve problems that have to be solved among people of good will.” In a later press conference, Reagan said he didn’t “know of any sportsman who leaves his home with a gun to go out into the field to hunt or for target shooting who carries that gun loaded.” The Mulford Act, he said, “would work no hardship on the honest citizen.” 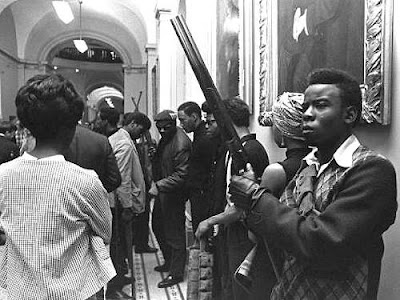 Notice that the Black Panthers were not standing up to federal soldiers.

It was not the federal government, but local and state police that participated in the lynchings of black men and women in the south.

It was not the federal government, but local and state police that routinely arrested young black men on trumped up charges.

It was not the federal government, but local and state police that bashed men and women in gay bars, and called Mexicans "tonks" because of the sound their heads allegedly made when slammed with the butt of a rifle.

And yet, with the NRA today, notice that no one is "AR-15 rattling" about the REAL (and occassionally continuing) civil rights abuse done by local and state police against blacks, hispanics, gays, and others.

Simple: the average NRA member is more than OK with blacks, hispanics and gays getting beat up by cops.  That's what police are for, they think: to protect white, male, heterosexual hegemony.

What a flashback for me. This was one of the Big Freakouts of the Grown-Ups when I was a kid in Sacramento, second only to the attempt on Pres. Ford's life a few years later by a Manson follower.

The Reagans lived a couple blocks from my house, and "Skipper" -- now Ron Jr. -- went to my school. We all rode our bikes to school together, followed by a black town car with body guards. That stopped not long after this incident -- too big a risk of kidnapping or a drive-by shooting, it was felt, for fifth-grade Ron to have a normal kid's life.

Anyone who thinks hate crimes don't happen in this country is living in a fantasy world.

And it's not just rural areas of places like Mississippi. Racially motivated crimes are alive and well in the suburbs of California, fed by fear-based propaganda spread by folks like the tea-party nut-jobs.

And people wonder why people of color are angry...

One of the NRA's arguments against more gun control is if more people were armed there would be less gun violence presumably due to carrying good Samaritans.

This logic didn't seem to hold true for the Assistant DA in Dallas where there is a large number of carrying civilians.

You are such good value, where do you find all this great stuff?

Ronnie Ray-gun coming out to bat for gun control - whodathunkit?