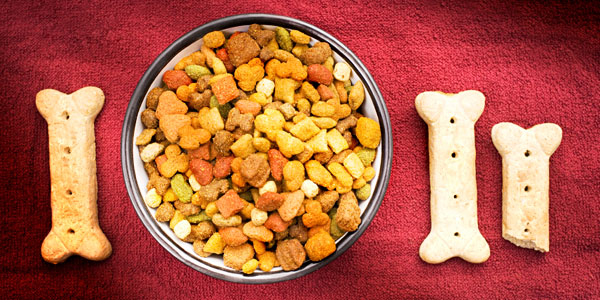 Science is the business of observation.

Sure, you have observed that almost every dog in the world is doing GREAT on a diet that includes all kinds of carbohydrates.

Sure, you have observed that even the bunko dog food companies that sell food that costs a lot more (using nonsense words like "human-grade," "holistic," "natural" and "homeopathic" ) pack their tins and bags with potatoes and peas, quinoa and rice, pumpkin and whatever else that is not the natural diet of a wolf (i.e. dead mice, dead rats, and road-kill deer).

Surely your eyes have told you that dogs are omnivores, same as humans?

You need someone in a lab coat to point you to something invisible?

Next you'll be telling me you are part of a religion cult that requires you to give 10 percent of your income to a man in a black dress who claims he talks to an invisible man in the sky.

Ah well.  For those people we have "science" in the form of a DNA-looksie:

Axelsson and his colleagues analyzed the entire genetic codes of 12 wolves from across the globe, as well as the genomes of 60 individual domestic dogs from 14 different breeds. They pooled the domestic pups' results so that the genetic traits of individual breeds wouldn't skew the findings and then compared the pet dogs to the wolves, looking for places where the genomes diverged.

This game of "spot the differences" led the scientists to focus on 36 different regions. They found that 19 of these regions contained genes crucial for brain functioning, including eight important for the development of the nervous system.

It was no surprise to see differences in brain genetics, Axelsson said, given that dogs had to modify their behavior to fit into human society. What did surprise the researchers, however, were 10 regions held genes involved with diet, specifically the breakdown of starches. Humans are well-equipped for starchy diets: Human saliva contains an enzyme called amylase, which starts breaking down starches as soon as food hits the mouth. Dog drool doesn't have this advantage, but dogs do excrete amylase from their pancreases, allowing for the digestion of starches in the gut.

The researchers found that dogs have more copies of a gene called AMY2B, crucial for amylase production, than wolves. And in dogs, this gene is 28 times more active in the pancreas than in wolves.

Dogs also showed changes in specific genes that allow for the breakdown of maltose into glucose, another key starch digestion step, and in genes allowing for the body to make use of this glucose.

And now SCIENCE tells us dogs are actually MADE to eat carbohydrates.

Of course, we always suspected it, but that was just based on stuff we actually observed.   Now someone we have never met, who wears a lab coat, has affirmed it, so we can believe it.