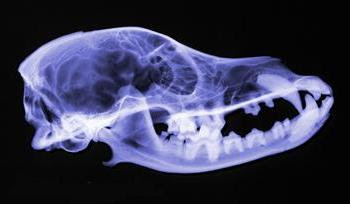 This is a normal dog skull, which is structurally identical to that of a coyote, wolf, German Shepherd, dingo, or Jack Russell, albeit with differences in overall size.
. 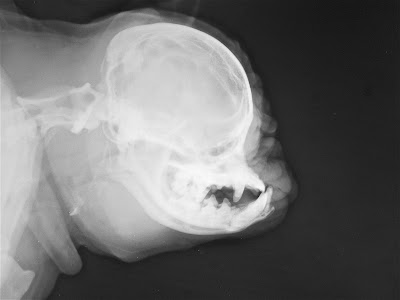 This is the skull of a Pug owned by a reader of this blog.  It reminds me of one of those "pickled punk" jars they used to have at circus freak shows in the 1920s and 30s -- a deformed human fetus in a jar.
Of course deformed animals show up all the time in nature.
The difference is that so many Kennel Club breeds are bred for intentional defect and planned misery.  This is is systematic and institutionalized animal abuse by the American Kennel Club and it is abetted by puppy peddlers and dog dealers who call themselves breeders, as well as their show ring sycophants who put their own desire for fifty-cent ribbons over the daily lives of the living animals to be found in their own homes.
Why do wolves, fox, dingoes, coyotes, fox and honest hunting dogs have long snouts?   For the simple reason that short snouts are maladaptive.
A dog with a short snout has no front-end eye protection when running in grass or weeds -- and yes, this is an issue for Pugs which often sustain serious injury because their eyes sit right at the "edge of the wedge" of their skulls with little to no orbit protection.
A dog with a short snout will almost always have teeth problems because the jaws have been shortened and now there is no place for the teeth and tongue to go.
A dog with a short snout will always always have a compromised sense of smell and may also have serious breathing problems if the dog's face is as short as that of a Pug's.  The reason for this is that the nasal chambers of a flat-face dog are much smaller than those of a longer-snouted animal, and may also be crushed and twisted, obstructing the flow of air.
The bottom line is that Mother Nature prunes away its mistakes -- it does not give them a ribbon or try hard to make a lot more of them.  And, as a consequence, in the world of natural dogs there is no canine that looks like a Pug!
If you have a Pug, try to keep it comfortable and love it until it leaves this earth.  It's physical problems are not of its own making, and the dog is without sin.  But pledge to never get a dog like this again.  Dogs deserve better! 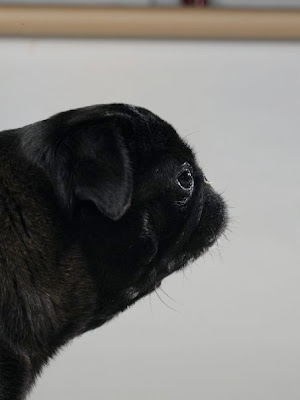 Same Pug as in the x-ray.  Picture courtesy of the dog's owner, picture by Tim Rose for Dog’s Today.
.

I have students who have a Pug and are looking to adopt a second from a Pug rescue. I spoke to them before they bought the first one, in an effort to alert them to the problems in this breed. They went in, eyes fairly wide open (I hope!), and read a lot on their own. They are charmed by Pugs and the young daughter is obsessed with them. They have demonstrated with their rescues of Greyhounds that they will go to all lengths to provide a great home. I can't help but fear for them, their hearts and their wallets.

Thank you to the owner of the dog for sharing!

Thanks for your blog and for this post in particular. I like your evolutionary and ethical perspective and I think your message to current pug owners is right-on; love yours until it dies but NEVER get another one. Because when you buy a pug, or an English Bulldog, or any breed made unhealthy for the sake of funny-faced cuteness, you're perpetuating that breed and thereby creating more animal misery in the world.

I'd want to know who owns the rights to the pug x-ray picture.
...because I wonder if I might use it for a video?

Her dog and she always stands for dogs!

Great posting! I am a vet and constantly confronted with owners of french bulldogs, english bulldogs, pugs, pekingese etc etc who have no idea about the dogs they have bought. People and the Kennel Club need to take a stand against the breeding of such extreme deformities and subjecting these poor dogs to lives of permanent suffering. In the last 2 weeks, at the clinic where I work, we have had 3 english bull dogs and 2 french bulldogs die from hyperthermia. It is absolutely unethical to promote these breeds as 'healthy' dogs to unwitting potential owners. I wonder how far the Kennel Club will go with these - at what point do we say stop?

Do you think that all pugs are a disaster? I would say that the dogs studied where from puppy farms where they put 2 dogs together to make money. If they were to do any genetic testing or chasing up compatible blood lines to produce sound dogs it would take away from their profit line. I think that most ethical registered breeders do their best to breed the healthiest examples of their chosen breed and still breed to the standard of that breed.

Yes, pugs are a disaster by design and standard. Most of the dogs are true brachycephahlic monsters, and many of the very worst are show pugs.