Cooking the Books With Mitt Romney 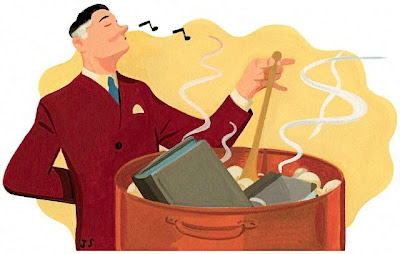 Simple:  According to credible sources, which Mitt Romney has not impeached by producing his own tax records for the last 10 years, Mitt Romney paid no federal income tax at all for a decade.

How is that possible?   Here's a likely scenario:


Is this the "Big Secret: that Mitt Romney is hiding?

Almost certainly some version of this scenario is what happened.

It explains not only how Mitt Romney ended up with over $100 million in a tax-free IRA which otherwise should have no more than $450,000 in it, but it also explains why his extraction from Bain Capital was a lengthy process negotiated over years, how he could have paid no federal income taxes for a decade, and why he will not share anything but his most recent two years of tax records.

Is there anything illegal with any of this?

If all or a large portion of Bain Capital stock was moved into Mitt Romney's IRA, then when that transfer occurred, and under what theory of valuation, is pretty critical.

In fact, making sure no one asks that question may be exactly why Mitt Romney has decided he would rather lose the election than have his taxes looked at by a sea of tax experts who would call those transactions into question and perhaps have them disallowed.

It's not like Mitt Romney's tax schemes have not been called into question before.

From 1993 to 1998, Romney was the head of the audit committee of the board of Marriott International. During that time, Marriott engaged in a series of complex and notoriously abusive prepackaged tax shelter schemes called "Son of Boss" which were designed to shelter corporate tax, but which were ultimately disallowed by the IRS.

To be clear, Romney was not smart enough to think up those schemes -- he was simply the guy on the audit committee at Marriott who gave the green light to an illegal tax avoidance scheme designed to steal scores of millions of dollars of tax revenue from the American people.

In the end, Marriott lost that gamble in court, and had to cough up over $70 million in taxes.

The point here is that Mitt Romney is more than OK to gamble and to play close to the edge with the IRS in order to avoid paying taxes.

In fact, Mitt Romney claims this is actually why he should be elected;   if he was not willing to try extreme measures to avoid paying taxes, then he does not deserve to be President of the United States.

No, I am not making that up.

That is how Mitt Romney thinks, and it is what he has said. And it is exactly why Mitt Romney does not want the American people to see his taxes.

You see, once upon a time someone did see Mitt Romney's taxes -- that someone was John McCain, who looked at over 20 years of Romney's taxes when he was vetting him to be a possible Vice Presidential choice back in 2008.  And guess what?  John McCain picked Sarah Palin.

Have you noticed that in all the brouhaha over Romney's taxes, the one voice that has not stood up to defend Mitt Romney is John McCain?   Silence here may speak volumes! 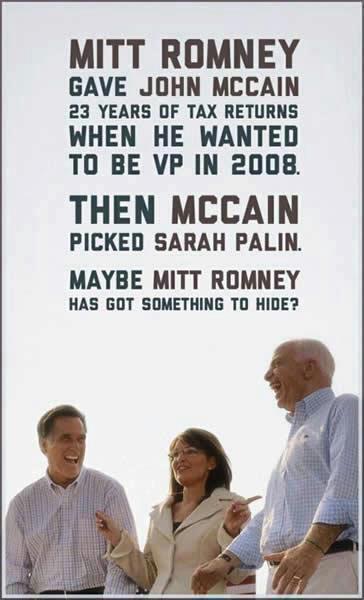 Well, though it took me twice to get it on some points, that was a VERY interesting distillation of possible events. I wonder how much he has to pay his accountants to administer this shell game? Clearly, filing an extension on his 2011 taxes is simply an attempt to file an extension on any public knowledge of this hooshkerdoo. He really is an empty suit.

This is overdramatizing something that simply doesn't meet the sniff test of something worth getting our dander up about. The shorter version goes:

1) Romney receives a substantial fraction of Bain Capital shares, at a time when they were relatively low in value, dropped in his IRA.

2) He exits the company at a time when they had a lot of value.

There is nothing particularly nefarious about any of that. In fact, if anything, it's likely that the problem, if there is one, is not on the back end but on the front end thanks to IRS rules limiting transfers to $5,000 annually ($6,000 for those 50 and up). As we have seen with stock option accounting, there is a great deal of latitude available in how these things are written down on the books. The net result of this might easily be, not that Romney is in trouble per se so much as he is covering for the people who allowed him to use such picayune asset valuations.

Yeah Rob. No big deal... Which is why EVERYONE is talking about it.

It's why Bill Kristol, Michael Steele, Jon Hunstman Sr., Richard Lugar, George Will and Karl Rove have ALL said he needs to release his taxes....

Now, to get to the meat and the potato, whether Mitt Romney pays taxes or not is a BIG DEAL. A VERY BIG DEAL, which is why it is the number one issue being discussed about Mitt Romney.

He wants to cut YOUR Social Security and Medicare and the pensions of federal and state workers, but he doesn't want to talk about how he got $110 million into his tax-free IRA?

MITTENS NEEDS TO STOP WHINING and haul his soft pampered posterior down to Kinkos. We want to see his tax returns and we want to see them NOW.

And a word to the campaign: Stop Whining. American presidents do not whine. Ever.

Even so, the gallop from $30,000 a year to $100M in assets is a large one, and we can safely assume most of that gain came from the earliest deposits. One possible way they might have gotten around this is by giving Romney stock options, which could later be converted into actual stocks at pennies on the dollar; but I expect the IRS would have had heartburn at something so egregious. So I am fairly convinced that this is all, really, about the front-end loading of the assets he now has, and how those valuations got to be so ridiculously small early in the company's history.

With the addition of Paul Ryan to the ticket, as reported earlier this evening by Chuck Todd, the mission will be to ELIMINATE Social Security and Medicade. Two henchmen, nice.