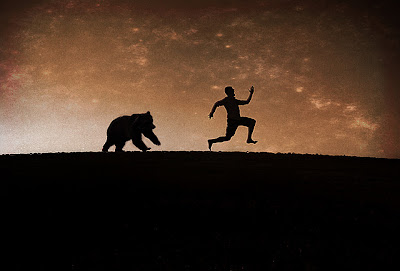 Perhaps the greatest stage direction ever is in William Shakespeare's Winters Tale, in which a scene ends with "Exit, pursued by bear."

A Polar Bear? In Elizabethan England?

Author Garry Wills, writing in Verdi’s Shakespeare, notes that Winter's Tale was written in 1610 and that in 1609, two Polar Bear cubs were captured from Greenland by Jonas Poole and brought to England where they were sold to Philip Henslowe's Beargarden, an animal-baiting establishment located right next to the Globe Theater.

The young Polar Bear cubs showed up in three theatre productions in 1610 and 1611 (one of which was "Oberon the Faery Prince by Ben Johnson) before they became too difficult to handle. Though in later productions actors in bear suits may have been used, or brown bears, in that first year of the Play, it is believed that the novely of Polar Bears was part of what drew the crowd.

Email ThisBlogThis!Share to TwitterShare to FacebookShare to Pinterest
Labels: bears