Is It Time to Dump the Bulldog?

Is it time to drop the English Bulldog as national mascot, and replace it with a healthier alternative?

The case to be made is obvious and straightforward. The modern English Bulldog is mostly Chinese pug -- a show ring creation with legs so deformed it can barely walk, a jaw so undershot it cannot grab a Frisbee, and with a face so bracycephalic it can barely breathe.

Add to this a deformed intestinal system which makes the dog fart constantly, a pig tail prone to infection, and serious eye problems due to excessive facial wrinkles, and you have a dog that considers its own death a blessed relief.

Is this a dog any patriot would choose as a symbolic representative of his or her country?

The Replacement in the Wings

The good news is that a replacement dog is ready available, and this breed is not only healthy, active and brave, but British to the bone and readily available at your local shelter or rescue.

The dog in question, of course, is the Staffordshire Bull Terrier. This dog represents half of all dogs now going to shelters in the U.K., and most of the healthy dogs on death row waiting to be put down for no other reason than they are not puppies.

Some may bridle at the notion of replacing the English Bulldog. Why not simply make a few minor changes to that breed’s standard, and keep it as it is?

Well, for starters, a few minor changes will not solve this breed’s problems! This dog is a complete morphological wreck, and trying to “save it” now is a bit like trying to raise the Titanic in order to start a cruise line venture. Only a fool tries to save a fantasy while reality is being killed at his feet.

And to be clear, the English Bulldog really is a fantasy production.

As early as 1894, Rawdon Lee, noted that the bulldog was bred "for extreme exaggeration, for extreme foreheads and huge skulls, for totally exaggerated low-slung front legs, and for shoulders pointing outwards at almost a right angle."

The dog Lee describes is not a dog with any historical roots. It was never a stock dog or a bull fighter. Instead, from the beginning, this dog was a dog dealer’s dream -- an animal to be sold to pretenders at a high price, and with a rapid turnover due to high rates of mortality.

And yet, the English Bulldog has remained popular – a top twenty breed in the Kennel Club, and a top ten in the American Kennel Club.

These folks do not want a dog that is too physically demanding, and the English Bulldog certainly fits that bill. This is a dog with a face so smashed in, and a trachea so reduced, that it often gets winded just walking from the backyard into the kitchen. A one-mile jog around the lake? That might kill it!

Dog breeders also like the bulldog because there is a steady demand for replacement dogs when an owner’s first dog dies. If you are in the puppy peddling business, a dog that lives for only six years is more than twice as useful as a dog that lives to age fifteen!

And once a litter is conceived, that’s not the end of medical intervention, is it? Not by a long shot. Almost all English Bulldogs are the product of a surgical procedure called a caesarian section. Try to avoid going to the vet and whelp an English Bulldogs at home, and you are likely to end up with a litter of dead puppies stuck in the canal, and a dead bitch too!

So, to put a point on it, in order to breed bulldogs you have to have money, experience, and certain coldness in your heart. No wonder that the supply of these dogs is not dramatically higher than the demand!

So what’s wrong with Staffies?

Well, not a thing if you want a real dog that wants and needs to be walked around the block two or three times a day.

Is that you? If so, then a Staffordshire Bull Terrier may be your cup of tea!

Another problem for Staffies, rather than with Staffies, is that because they are not anatomical freaks, they can breed and whelp on their own.

What that means is that any young fool in a Council House flat can squeeze out a litter on their own in the hope of quick cash.

Sadly, that happens too often, and with predictable results: a flood of poorly-homed dogs that end up in “rescue” with thousands of healthy, friendly dogs being killed every year for the crime of no longer being a puppy.

Another issue, of course, is that the Staffordshire Bull Terrier is not a fantasy dog that arrives completely denatured.

While the English Bulldog is as closely related to pit and stock dogs as a Chihuahua to an Arctic Wolf, the Staffordshire Bull Terrier of today is remarkably unchanged from the days of yore.

Does that mean this dog is dangerous? No, but it does mean that this breed, more than most, needs the kind of proper socialization, exercise and training that can only be provided by a steady home life and a hands-on owner. Sadly, this is the opposite of what so many Staffie owners have to offer.

So, to circle back, is it time to reconsider Britain’s canine mascot? Do you really want a half-Chinese dog that cannot move well, cannot breathe well, and cannot mate or whelp on its own as a national symbol? Or do you want a dog that is British to the bone, as healthy as they come, and is as tough as an old shoe?

In the world of dogs and politics, making a new choice would send a powerful message to the world. 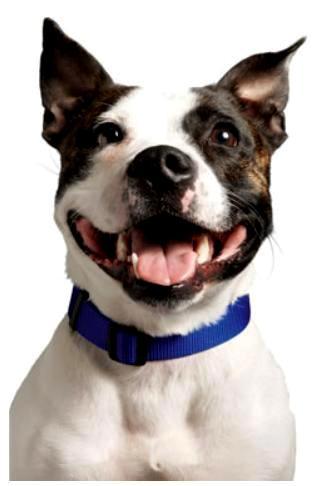 One of several breeds that was developed by selecting for two forms of dwarfism (achondroplasia and brachycephaly). In other words the "breed standard" is to breed for two genetic mutations.

Wow. I knew all about Bulldogs requiring a caesarian section to give birth but somehow the mating cradles had escaped my notice.

So I did a little research and found this page:

I mean, I already find it weird when people make out that their dogs are 'in love' and that's why they are doing it doggy style. But why do we need a shed load of pictures of bulldogs awkwardly sexing it up with some guy crouched over them 'helping' the poor male get it in?

And yes! I am a staffy fan all the way. They are easy dogs as long as they ARE adequately socialised (pretty much the same as any breed). Good fun, athletic and kind souls.

I've had three Staffies in all, a dog and two bitches. They were all loved and cared for and lived to a ripe old age, one dying in front of the fire and two put down because it was kinder.
The last one died seven or so years ago and I miss them for they are absolutely super pets. Loyal brave and kind. Still miss them, but I'm past the age where I might not survive beyond them, so it's a concious decision.
Look after them and you have a great friend and protector for as long as they live. Toby, Shiona and Meg thank you for the love I shared with you.

Up here we don't need a dog for a mascot we have the Scottish lion.

Here here. This monstrosity is both sad and comical. I was actually charged by a BBD. My Jack Russell held his own and actually drew blood while receiving no injuries.. The owner came running from the house screaming 'she won't hurt you'. Actually, other than knocking me down and skinning me up a bit, she never got the chance. Abbott played her like a matador and got the only bite in. He received no wounds.

So much for the old gladiator breed.

Debi and the Texas Jack Rats.

Long-time dog person here, specializing in accidental canine acquisition, recently - having spent years claiming I would never have a pit bull - voluntarily 'adopted' a 90# brindled, no-neck, teeny-eyed, sumo-stance Staffie and am amazed to get to know this guy.
He was four years old, never abused but just cared for and otherwise ignored for a few yeats, so no bad habits to undo. He was astonished to meet my two teeny terrier mixes, but once he realized they were actual dogs he was and is fine with them. When he previous caretaker visited after he had been here for a week, he was courteous, but not interested in interacting at all. He knows that he is now 'home.'
He trains so easily that it can take me a while to realize that he no longer does whatever I once expressed gentle disapproval of. He doesn't want to go for walks; he wants to stay home, in the overgrown. fenced half-acre or so that surrounds the house, even though everybody else enjoys going out to feed the horses every morning in the other 12 acres, and we do 'walkies' - a quick mile - every evening, but Rufus doesn't want to go.
I can't - obviously - say enough about this dog. Thanks to Terrierman for giving me the impulse to try something so new, and so incredibly satisfying.