What the Hell is the Saint Francis Terrier? 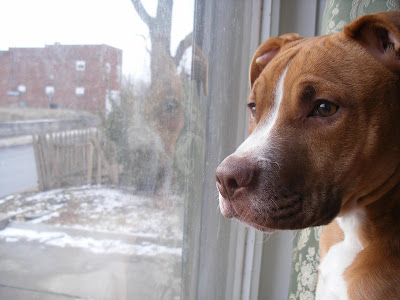 This morning I popped open my email to get a very nice article from someone who cares a great deal about reducing shelter death in general, and Pit Bull death in particular.

More on that in another post, but for right now, in order to keep the focus on the story, I append a little squib that jumped out from the piece.  It's about the efforts of shelters and rescues to "sell" Pit Bulls to the public:

Striving to implement the 1994 Adoption Pact, which made San Francisco at least nominally the first U.S. "no kill" city, the San Francisco SPCA introduced free sterilization of pit bulls. When that did not stop the rising influx, the SF/SPCA in 1996 renamed pit bulls "St. Francis terriers," in hopes that changing their image would make them more adoptable. More were adopted--but the original "St. Francis terrier" program was suspended within 60 days, as was a similar program introduced by the Wisconsin Humane Society, when several of the strenuously screened and rehomed dogs turned out to be cat-killers.

After retooling and relaunching the "St. Francis terrier" program several times, and having another fiasco in 2003 when an adopted pit bull attacked a police horse, leading to two human injuries, the SF/SPCA and San Francisco Department of Animal Care & Control between them reduced their pit bull killing to 450 per year. Then, against vigorous opposition from the SF/SPCA and local animal rights groups, the SF/DACC persuaded the San Francisco City Council to pass an ordinance requiring all pit bulls to be sterilized. Pit bull shelter killing in San Francisco fell to 300 in the first year after the ordinance passed. Within another year San Francisco shelters were killing fewer pit bulls than any cities except Denver and Miami....

Surely this cannot be true?

But, of course, it is. A quick tour of Google and I come up with this:

The Saint Francis Terrier, which has been their name, officially, since 1996, and first used by the SPCA in San Francisco. They were formerly known as the American Stafford Shire Terrier, or Amstaff.

"Saint Francis Terrier" is very befitting, because this breed has a lot of integrity, warmth, is extremely loyal and loving -- the most affectionate and intelligent dog in the world!


Uh, right. Very smart, very loyal and very loving most of the time.

And yet these dogs are often very dog aggressive, are they not?

They are also implicated in about half the dog-related deaths and a very large percentage of the serious maulings that occur in this country.

Yes, that too is true.

And, of course, they are not a terrier.   As I have noted in the past, an "American Staffordshire Terrier" has no terrier in it at all. It is pure molosser, and is descended from a long line of butcher's dogs that now includes Boxers, Rottweilers, and Dogue de Bordeaux.  A terrier does not become a terrier because you tack that word on to the end of its name!

Of course, the world has not been much deceived, has it?

Look up Pit Bull in the dictionary and see what you see:

Now, to be clear, I am all for adopting Pit Bulls from the pound.  Yes, absolutely!  Please look them over and consider them, especially if you are in the market for a mid-sized to large dog, have a fenced yard, and you are not a first-time dog owner.

But be advised that Pit Bulls are not "just like every other dog" in the world. That is a lie.

No, Pit Bulls are not as dangerous as lions, but they should never be marketed as "nanny dogs" either.

And for God's sake, let's not start marketing them as "New Yorkies" or "Saint Francis Terriers" either.

These dogs are Pit Bulls, not "pet bulls" or plush toys.

As I note in a 2006 post entitled What the Hell is an American Staffordshire Terrier?

Kennel Club owners of these dogs will tell you they have worked hard to breed all aggression and prey drive out of their charges. And no doubt many have. What a comical thing that is, of course -- a bit like an auto club bragging that their sport cars have no engines.

The only thing is .... it's not always true. "Bad breeding" and "poor socialization" are often blamed when dogs descended from pit and catch dogs attack small children, but ... could it be .... perhaps ... that a small bit of genetic code remains unbraided as well? It is certainly in the realm of possibility, is it not?

In fact, molosser breeds can make fine pets in the right hands, but many of these dogs demand much more time, energy, and commitment than their young owners realize.

A large dog in the hands of a young man with shifting interests and an unstable housing situation (i.e. most young men) is a recipe that too often leads to dead dogs at the County shelter.


Sadly, as true then as it is now.

The nearly one million Pit Bulls that will be killed this year were all bred, acquired and dumped... most of them by young men and women with shifting interests and unstable housing situations who said they loved Pit Bulls. For too many of these people a Pit Bull was their first dog.

And what was the predictable result?

Dead Pit Bulls and a lot of misery.

We are not going to change that equation with new marketing slogans and fantasy names for these dogs.

The problem with Pit Bulls is not marketing; it is the reality that this is the wrong dog for most people.

The problem with Pit Bulls is the Pit Bull.

Until we embrace the dog for what he is, rather than what we want him to be, the mis-match between dog, prospective owner, and society will continue unabated.

I have recently seen pitbulls referred to on the internet by those who own them and wish to promote them as wonderful and loving family pets as "pibbles." I don't think this really helps the dogs in any way. Watering the name down, does not change the dog. And you are correct there are many young people who acquire these dogs because they are "cool" without thinking about any long-term comittment.

I so agree with Tracy. We see this sort of thing a lot.... Your article well written and one that I will cross blog!! Looking forward learning more from you.

2 dogs and a cat (Milita, SnowPea and JuneBug)

I think a good deal of the problem is that most people are simply stupid around dogs. Here we have very few pit bulls, and they're generally very expensive, and so the (cheaper) collies, golden retrievers and spaniels (yes, spaniels) are involved in most bad attacks. There are also special restrictions on pit bulls, german shepherds, and other breeds but they're honoured more in the breach than in the observance.

Terrierman I am very much a fan and enjoy reading the intelligent way that your posts are put together.

In some of your recent posts you have commented about Pit Bulls. I think there is a great amount of legitimacy with regards to what you have to say.

I do feel that there is a substantial amount that is missed in this classic debate. I would very much like to correspond with you via email or phone and perhaps it might fuel a post in the future. I would be very honored if this was to occur.

To be honest, I am a Pit Bull owner, by the definition of some. As far as I know she could be some weird mix of Lab, Boxer and Terrier. :-) I can supply you with pictures and you can tell me what you think.

I am certainly of the mindset that Pit Bull like dogs should not be owned by the inexperienced.

I also don't buy into the fluffy, rose colored sun glass perspective of the rescue type that claims, "it is all how you raise them." Trust me I have heard more than my palatable share of nonsense from this crowd.

I am a dog trainer and have a network of friends that are dog trainers. I would be more than happy to provide you with real world discoveries in the future if you care to contact me.

I have provided you with my real name and phone number. That should hopefully remove me from the category of Internet Troll.

My email address is on the top of the right column. I have two kids, a job, and dogs so I do not do much phone talking or debating, but I will read whatever you send. A suggestion, however: Do not send me nonsense from the National Canine Research Council which is not a council but a single vet tech! Also, be sure to actually read the posts to see what I have said. The "beteeen two lies" article in "Dogs Today" is a good place to start, as no one is demonizing Pit Bulls, nor am I looking away from what actually occurs too often. A good place to start is to define what you would admit is the the nature of the problem, and then to define the scope of the problem (numbers). Then, once you have stuck in your sticks to define those two corners as you see them, have at it for building a policy house that encompasses those two corners.

Nice article, as always. But bulldogs and butchers' dogs are not "molosser" as my favourite dog writer David Hancock has been preaching for many years.

The pitbull is neither a terrier , nor a molosser. It is likely a descendant of the butchers' dogs, and other mastiff types. These are guard breeds, and in my experience the guard instinct comes with a certain amount of animal aggression, of course with a lot of individual variation.

David Hancock is making an archaic semantic distinction which is interesting but not very germane to dogs today. When you’re citing Aristotle, you might as well as citing Zeus or Thucydides. 😄