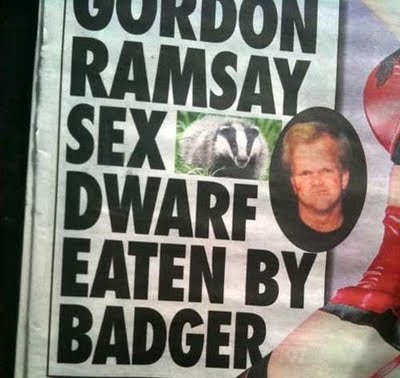 I am going to play this straight and just stick to the facts.

According to a report in U.K. tabloid The Sunday Sport, the 3'6" actor was found "deep in an underground chamber by Ministry of Agriculture experts ahead of a planned badger-gassing program near Tregaron, west Wales."

Expert CSI teams had to use fingertip technology to remove his body from the six-foot-deep burrow, and investigators have not yet ruled out the possibility of suicide.

"Percy was a little guy with big problems," said adult film producer Dexter Yamunkeh. "He was doing well but was under pressure like everyone else in this god damn industry."

In a recent interview, 35-year-old Percy revealed his delight at being compared to Ramsay.


To be clear he was found in Wales, which pretty much explains everything.

Email ThisBlogThis!Share to TwitterShare to FacebookShare to Pinterest
Labels: humor

Well, I'm pretty sure that's the most bizarre news I'll hear today--or almost any day for that matter!

What is "fingertip technology" and how would it assist in dragging a porny dwarf from a badger den? The headline sounds a little like those manly-men magazine covers you've posted a few times. The "Jaguars ripped my flesh" stories. This zany world of ours!

I am not going to swear on the veracity of this story. There's a picture, a name, etc., and the short version is that a very small person with a wierd job was found dead in a hole. Could happen. If you fall head-first into a deep hole, it can be nearly impossible to get out, blood pools, and you suphocate. But did this actually happen, or was it a bunch of tabloid editors sitting around writing a ringer? Who knows?

For my money, this one's a ringer. For a start, in the UK there is no badger gassing being done at all, since the approved fumigants (hydrogen cyanide gas, "Cymag" to generate hydrogen cyanide and finally methyl bromide) have all been banned. The UK Ministry of Agriculture was renamed to "DEFRA" some years ago, which even the dimmest UK newspaper would know, hence the use of the older name is unusual and perhaps points to this being an old story revamped a bit.

Then we have the fact that the guy was found near Tregaron. I happen to know Tregaron quite well; there isn't really much there to get to know, and calling the place small is exaggerating the size a very great deal indeed. You're literally talking about a small village whose main claim to fame is a large area of marshland to the north, Cors Caron (also called Tregaron Bog).

If he'd been anywhere in that area, I would have expected it to have been Aberystwyth; a bigger, more cosmopolitan University town but even then, quite incredibly gossipy to the extent that secrets don't really exist. Plus, the police and town elders there are a wee bit sensitive to anything that might bring the town into disrepute, and would likely run a porn-star out of town in very short order; such a man would also find, once his reputation got around, that none of the locals would give him time of day, let alone sell him anything.

This sounds very like Sunday Sport journalists making up a space-filler story, then killing it some time subsequently, as per their earlier "double decker bus seen on moon" series.

Yes, a bit hard to believe as I more-or-less suggested in the "related links" which go to books about nonsense tabloid headlines. The badger cull bit is pretty close to the truth, however. Wales is about to start a badger cull with trap and bullet. The best blarney has a few nuggets of truth to keep it all rolling ;-)

These stories will have to stand in until some angel revives The Weekly World News.