Beyond the Prison Planet 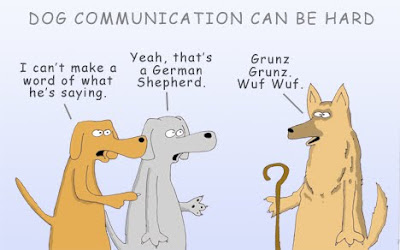 Heather Houlihan at the Raised by Wolves blog has a brilliant little photo essay up entitled Not Your Stick.  Read the whole thing.

This is a post about how old dogs teach young dogs, about reading dog behavior, and about inter-canine communication. Good stuff!

I was bird-dogged to Heather's post just moments after responding to an email asking me whether I thought there was some genetic slippage in dogs as far as dog-to-dog communication was concerned. So many show dogs seemed somewhat infantalized in their behavior, while the working dogs were generally more serious and self-purposed. Could this be a genetic issue? Were modern dogs losing their ability to communicate as natural dogs?

Hmmmm. A new question requiring new thought! My answer, for what it's worth (and see your receipt for the price charged!):

A good question, but I am afraid I do not know enough to have an answer.

Observationally, I would agree that some breeds of dogs never really mature emotionally, often remaining quite dependent, playful and goofy into pretty advanced age. Others are much more independent, less playful and serious from a very early age. Konrad Lorenz talked about this, noting that the more serious dogs tended to be "one man" or "one woman" dogs with strong loyalties to particular individuals, while the other type were more "emotional sluts" (not Lorenz's term!) that would quickly give themselves over to just about anyone for a belly rub and a piece of kibble.

I would also agree that a lot of dogs seem to have bad communication skills, either sending the wrong signals or not understanding those they receive from other dogs. But is this genetics or socialization? I am not sure, but let me make an observation and offer up a thought experiment....

The observation is that so many dogs these days live "prison planet" lives.

Now the thought experiment: flip the scenario around.

Suppose a small boy or girl, age three months, is brought to live alone in a cave tied to a large fenced yard. He shares the cave and yard with five or six dogs, but other than that, he only communicates with other people on those brief occasions when he is allowed to leave the yard and can actually interact with them. Will this boy learn the language of humans with so little contact in such truncated circumstances? What will this child act like? This adult? This old man?

When we talk about poor socialization, we tend to mean dogs that are overly fearful or aggressive towards other dogs and other people. But I think poor socialization just as often expresses itself in another way -- dogs that are SO in need of canine contact, and so inarticulate in "dog speak" that, when put before other dogs, they are like long-term foreign prison camp survivors swarming over their liberators, crying and laughing, pawing at their pockets and kissing their feet as they try to get their cracked vocal chords to work again and remember the word for "thank you" in their almost forgotten mother tongue. And these are men who were captured as adults and after only a few years as captives! Imagine how bad it might be if you were taken to a prison planet -- a suburban home -- as a child.


It is indeed a lucky young dog that gets to meet -- and get instructed -- by an older dog like Cole who, ironically enough, was a Prison Planet dog once himself -- a survivor of the great Montana English Shepherd rescue.  Nice job paying it forward, Cole.  Good doggy!

I think you could have gone a bit further on your answer. In my opinion, most dogs in surburban homes, or "prison-planets," are not allowed to be dogs. People expect perfection out of dogs when they don't expect it out of cats or their own toddlers. They refuse to learn the rules of dogdom, and instead punish dogs for being, well, dogs.

The "Not your stick" photo essay was an excellent example of dogs doing dog things - but how many homes would allow the older dog to even play the "not your stick" game without attaching human qualities to the dog -i.e. Luke is being selfish, and he needs to share, so therefore I will interfere with pack order and make him share - without realizing the consequences of playing referee where none is needed.

And bearing of teeth to another dog? Heaven forbid! It is one of the reasons that every puppy that gets sold from my house (rescues included) come with a copy of Cesar Milan's book How to Raise the Perfect Dog as well as the the book The Other End of the Leash. I find it so important that dogs get to be dogs!

The working dog vs. show dog issue - I've had long conversations with fellow Terrier breeders regarding this... and I started on a long, boring reply but I will save that for my own blog. May I use part of your post (with full credit given, natch) in a post of my own?

And YES, I agree that people too often do not let dogs simply be dogs, nor do they appreciate the essential "doggyness" of most canine responses.

I have been thinking about a related issue, and it sort of fits in here.

I have a house-guest at the moment, or rather, a house-sitter who's not leaving anytime soon. He and his dog are (were) homeless. Prior to that, he had a 3,000 square-foot-home on Puget Sound, a marriage and a (obviously) well-paying job, all of which imploded in a spectacularly short fashion. (He used to be a co-worker of mine, which is how I came to ask him to house-sit. His story is here: http://seattletimes.nwsource.com/html/pacificnw/2011906512_pacificpfoodhunt30.html?cmpid=2628 .)

He has been living on the street for a while with his dog, a shepherd mix. He observed to me that the dogs of the homeless were in general highly intelligent and well-behaved. And indeed, his dog is exactly that. She's also extremely well-versed in "not your stick" and other societal niceties of the world of real dogs. (Her game is "not your human" -- she tolerates her owner's interactions with the others dogs, but only because he has told her to do so. She Doesn't Like It, but defers to him in this and all matters.)

If I previously thought about the dogs of homeless people before, it would have been along the lines of, "that's actually not a bad life for a dog" because the animals are, after all, with their people 24/7 and always on the move, as dogs are intended to be.

But now I'm thinking that their behavior, at least as personified by this dog, reflects a life not as a suburban "pet" but as a real dog, constantly adapting to, evaluating and reacting to new situations, including a constant array of other dogs doing the same.

By the way, while one would think Torky would "love" no longer living out of a late-model Subaru, I don't think she really digs it that much. She especially doesn't like that he leaves to go places without her, although she handles that with grace and dignity as well.

Dogs are brilliant and FAST thinkers and pretty adaptive, as all top-end predators have to be. The more you realize that, the more you realize how few people should own a dog, as they need the mental stimulation of variety and interaction with people and other dogs at a level that most people simply do not provide (if my dogs could talk, they would tell you I am no exception). Brains are like any muscle -- the more they are excercised, the stronger they become.

It's interesting that most experts generally accord a degree of intellectual intelligence to a dog that is on the level of a young child. I believe Dr. Coren affixes it to be around age 2. (I have one complaint with such an assessment) Yet were a child to behave as Cole did with the sticks, we wouldn't think the older child was being healthfully instructive to the younger child. Therefore we might want to take a deeper look at what Cole was teaching the younger dog relative to the sticks so that we could have a consistent interpretation with what was going on between them relative to the turkeys.