Is Slentrol Just Illness in a Bottle? 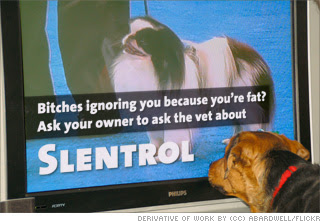 I've been researching Slentrol [a dog weight reduction drug sold by Pfizer].... Nearly everyone who has publicly commented on the issue seems to agree with your basic position: A pet owner can control diet composition and amount of food intake by the pet, and dogs need exercise anyway, so a diet pill for dogs is superfluous.....And Slentrol was recently in the news when the FDA announced in October that it was going to do a voluntary review of Slentrol side-effects as related to dog genetics.

Anyway, I have two questions that maybe you can help me with:

(1) Several sources say that Slentrol was researched as a human diet pill but rejected by the FDA. I can't find anything about this on the FDA website or anywhere else first-hand. Have you ever found such a reference?

(2) Nearly everyone quoted Pfizer's reaction to the FDA review, but nobody at all quoted the AVMA's letter to the FDA, which is here.  I think the AVMA makes some good points in the third to fifth paragraph. I'd be interested in your comments on them.

I am no expert in Slentrol, but I answered what I knew to be true:

FDA approval for drugs, human or animal, is not open-ended. What I mean by that is that approval is for a defined problem in a specific situation or animal. What the FDA is weighing is:

(2) the health risks associated with the drug or device as compared to the disease or condition, and;

(3) the availability of other remedies with fewer risks.

Most of the weight control drugs hit the rocks at #1 (they barely work) and #2 (messing with the endocrine system of any animal is generally not a good idea when all you need to do, in most cases, is eat less and exercise more).

Approval of a drug in humans involves Phase I, II and III trials, and often post-FDA approval Phase IV trials as well. All of these trials are expensive, and a company will withdraw a drug from trial if the side effect in humans are such that the drug it not likely to be a big seller. That's what happened with Slentrol, from what I understand.

Humans simply did not tolerate the drug very well and Pfizer decided it would not sell.

Because a drug is approved for humans or dogs does not make it entirely safe or even good medicine for the problem at hand. Look at Cox-2 drugs, like Vioxx and Bexta. Both were approved for humans, even though they have never been shown to me more effective than aspirin, and then analysis of Phase IV trials revealed that both of these drugs were implicated in killing people (Vioxx alone may have cost over 20,000 human lives). And yet, Rimadyl, a Cox-2 drug never approved for humans, is still given out for dogs by vets. Why? As I have noted on my blog, most of the time it's a drug that is overly expensive and not provably better than a cheap buffered aspirin. To be clear, I think there's a place for Rimadyl, but it's not the first order of medicine for a dog with a sprain or a cut that is knitting up on its own. And yet vets love it, because it's a huge profit center, something buffered aspirin will never be...

.....As for the AVMA and Pfizer, you might want to look on my blog and see the nice cozy relationship they have. Pfizer underwrites the AVMA annual conference, and the AVMA makes money selling Pfizer products.

As for AVMA president Ron DeHaven, he is little more than tambourine-shaker for veterinary bill padding, upcoding, price-gouging, and the sale of medically unnecessary goods and services.   He is also the person who did little-to-nothing to end the horrors of puppy mills when he was with USDA, and head of the division that was supposed to be taking action there. Again, see my blog where I have pictures, video and text that make the case about both the AVMA, Pfizer, and Ron DeHaven.

Tonight, while researching something job-related and having to do with the human side of health care chicanery, I came across this nice article on Slentrol by Jim Edwards at BNet. He writes:

Ignorance is bliss, if Pfizer’s opposition to a small FDA study to see if certain dogs experience more adverse events on Slentrol, a weight-loss pill for hounds, is to be believed. Why would Pfizer not want to know whether certain genetic breeds of dogs react differently to the diet drug?

The company says the test is unwarranted:

Given that the majority of adverse reactions that have been received are consistent with mild labeled adverse reactions and that the breeds represented in these cases are consistent with breed popularity and the most commonly observed obese breeds, there does not appear to be any correlation between specific dog breeds and specific adverse events ...

The study underlines one of the chief concerns about the drug industry’s rush into the pet-med category: Dogs and cats can’t complain if they believe the drug is harming them. Even better, they can’t get onto the Internet and inform other patients of the side effects they’re experiencing. Sure, an owner can report physical or behavioral side effects to a vet, but she can’t report mental side effects or internal organ changes that can’t be seen with the naked eye.

This issue is particularly acute for Pfizer’s Slentrol for three reasons:

(1) The FDA is leery of approving diet drugs for humans precisely because their side effects are often so weird.

(2) It’s possible that side effects on pet meds are under reported because dogs can’t talk.

(3) Three of Slentrol’s major side effects are unhealthy responses that might also lead to weight loss: vomiting, diarrhea and anorexia. Click to enlarge this image of the Slentrol adverse reaction list:

Could it be that some dogs lose weight on Slentrol not because of its efficacy but because they feel so sick while taking it?

It’s also interesting that the prescribing information indicates that the control group received corn oil but does not say that the Slentrol group received it. My local vet tells me there’s no reason for a dog to receive corn oil, even if you’re trying to make its coat shiny. There are dog food supplements for that. She did say, however, that corn oil would be a good way to give a dog diarrhea. Could it be that that diarrhea in the control group is overstated due to corn oil, making diarrhea in the Slentrol group look less dramatic by comparison?

Pfizer gave this reason for the corn oil:

Which suggests to this layperson that if the dogs had been corn-oil free, like normal dogs, then the diarrhea side effect would indeed be much lower in the control group.

And finally: You could always give your dog less food and walk him more.

It's just a thought that the AVMA is taking payola from Pfizer to make your dog sick.

It's just a thought that the AVMA is the store selling the drugs and the trade association ginning up a contrived need, and the group trying to prevent FDA review.

They may not connect right away but folks who search and read the dog forums will certainly connect and start sharing information on their sick dogs.

Our Aussie/Blue heeler mix has been on Slentrol for approximately three years, maybe less. She went from 72 lbs. down to 44 - 46 lbs. Last year we tried to wean her off the meds and she got very food aggressive. Actually got into a fight with one of our Jack Russell terriers. That cost us over $1,000.00 and Dixie two surgeries and a lot of pain and suffering. We upped the meds back to 1.5mls. and all has been calm at our home.
We have the last available bottle for her and the veterinarian has no idea what to do with our dog when this bottle runs out.
Basically, her death sentence was signed by Pfizer on March 20, 2014. We will be trying her on Xanax hoping to keep her aggressions under control but we also have Chihuahua's and one bite from her they will be dead.
We are very sorry to have ever have started her on this med.
Thanks for listening.
Larcye Wright