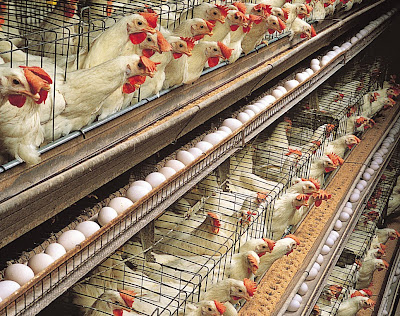 Purdue researchers have developed peaceful chickens to reduce 'cannibalism' in factory farm pens. That sound like a good thing, but there may be a small joker in the deck. You see:

Researchers say decades of breeding to make the white leghorn hens that lay most of the nation's eggs more productive have also boosted the birds' territorial instincts, making them prone to pecking attacks so fierce they're often called "cannibalism."

What's that mean for "peaceful chickens"?

It means they likely produce less, which means fewer eggs per bird per year and, presumably, a higher price for eggs.

Will that matter? Probably not.

Eggs are so cheap now, that a few pennies -- or even 50 cents more a carton -- will not change how many eggs I consume, or what I pay for anything at the store or in a restaurant.

But will more peaceful chickens improve the lot of egg-producing poultry? Probably not. Egg-producing chickens will still be crowded, will still live in darkened sheds, and will still end up dead and in dog food after their egg-laying life is over..

I have made my peace with it. Nature is red in tooth and claw, and anyone who thinks otherwise should check the bottom of bird nests this time of year. Nothing gets out of this world alive, and the best any of us can hope for is ready food, ready water, a roof over our head, and a little companionship. Put in those simple terms, most factory chickens are doing far better than a billion people on earth.
.

Email ThisBlogThis!Share to TwitterShare to FacebookShare to Pinterest
Labels: farm

Ah but there are those who know better than the poultry farmers.

I would say that actually may be true ... but to what end in the end?

Certainly, most people know better than puppy mill purveyors. And I have seen an owner of mules in North Africa beat them in a head with a rock until blood come out their ears. Ownership does not mean common sense.

And it is absolutely true that farmers judge everything on a pennies and pounds axis, and that is not the only one axis upon which to judge things. We have environmental, sanitation, and humane laws for a reason. There is no reason that life on earth cannot be less miserable and a bit safer for all, if that is easy enough to do. And often it is.

But with some things, like chickens, the money spent and the concerns raised, yield pretty small fruit, it seems to me.

Still, I've been eating free-run eggs only ever since I worked in an egg barn.

You raise a good point. When I think about factory farmed hens, I think it's inhumane the way they are forced to live out their miserable lives. Unfortunately, I can't take on every worthy cause in this world. I count on those who have the drive and wear-with-all to improve the lives of hens. I support them in spirit and if they do get meaningful legislation on the ballot, I'll support them with my vote. In the meantime, I have to buy eggs.

One always has the choice to support cruelty or not.

Nature may be red in tooth and claw, but there's no nature, as the term is commonly understood, in industrial egg and meat production.

To compare it to predation in the wild is disingenuous and inaccurate to the point of being silly.

I eat meat and eggs, but choose to source both, locally as much as possible, to ensure that the animals have a decent, cruelty-free life and a humane end.

Sheer numbers shouldn't determine the amount of cruelty we are willing to tolerate.

What's the threshold? A thousand chickens? A million? Ten million?

Are a million steers more worthy of consideration than ten million chickens?

Is saying "Yeah, but they're just chickens?" really any different than other people saying "Come on, it's just a dog?"

Dr. Temple Grandin has some interesting things to say about breeding for certain chicken traits in "Animals In Translation."

In a nutshell, breeding for one trait is generally going to backfire. In any breeding program.

I eat eggs and chicken, and other meat. I cannot afford "free-farmed" chicken. I do not wish suffering on any creature, least of all ones who die so I can eat, but one must choose one's battles.

I figured my body was trying to tell me something. I decided to listen to it.

I believe I make a difference for some people and animals on this planet at least every other day. I love my job, and I am satisfied that I am a decent human being who is contributing to the world in some small way.

Does the fact that I eat meat nullify this? I know vegans would say yes. But who wants to listen to sanctimonious jerks?

I have mixed feelings about eggs and chicken, having spent a weekend of my younger life shoveling chicken bodies after a blizzard shut down the exhaust motors at a local chicken farm. The result? Thousands of suffocated chickens in a very short time.

Our decision? We get 4-6 older hens from local farms that are going to turn them into stew. They are our entertainment, insect control, garden weeders and egg producers. They are not our pets--we do not name or train them but we do find them delightful. Our working retrievers have learned to avoid them thanks to electric stock fencing.

In terms of chickens, we do have choices. We can't keep cattle but we can take other decisions into our own hands.

Typo alert in the headline:

(should be Mean, right?)

Indeed! I has corrrected it ;)

I've been to one of these farms. These are far worse than what the average animal faces in nature. These hens can't even expand their wings. That has to be torture. There is no excuse for that.

Can't agree with your remark about factory chickens. An early end is one thing, but a miserable life without the opportunity to exercise your basic behaviours is quite another. I buy free range eggs and chickens. You can always compensate for the extra price by eating less of them.