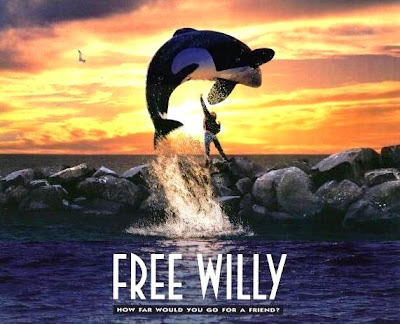 Whatever happened to Keiko?

Kieko, for those who do not know, was the star of the movie "Free Willy."

Keiko was born in 1977 or 1978, and captured near Iceland in 1979. He was then sold to the Icelandic aquarium in Hafnarfjörður.

Three years later, in 1982, he was sold to Marineland in Ontario, Canada, where he first started performing for the public and where he began to develop skin lesions.

It is here that Willy first came to the attention of a writer and producer for Warner Brothers, who wrote and produced the movie "Free Willy," which premiered in 1993 and made over $153 million worldwide.

Thanks to publicity from the movie and its sequels (and with the very reluctant support of Warner Brothers) a push was made to "save" Keiko by moving him to a better aquarium in the U.S.

In 1996, Keiko was flow out of Mexico by UPS and rehomed at the Oregon Coast Aquarium in his own $7 million tank. Over the next two years, Keiko gained over 2,000 pounds in weight and rid himself of his skin problems.

In September of 1998, Keiko was flown to Iceland under the auspices of Jean-Michel Cousteau's Ocean Futures Society.

The goal: Return Keiko (aka "Willy") back to the wild.

Keiki was flown in a US Airforce C-17 transport jet to a massive holding pen in Klettsvik Bay in Vestmannaeyjar, Iceland where he was to be re-acclimatated to the wild.

Part of the reacclimatization program eventually included supervised free swims in the open ocean where, after a period, Keiko appeared to begin feeding on his own, and where he also met (and perhaps socialized) with wild Orcas.

On a supervised free swim in July of 2002, Keiko disappeared, and he could not be relocated despite satellite telemetry attached to one of his fins.

In November of 2002, Keiko was spotted off the coast of Norway, almost 900 miles away, and he followed a fishing boat to the port of of Halsa,. Norway.

From Halsa, Keiko was led, through the open ocean, to nearby Taknes Bay where he was fed by caretakers, and where the responsibility for his care was transfered from the Ocean Futures Society to the Free Willy Keiko Foundation and the Humane Society of the US.

In December of 2003, Keiko died in Taknes Bay, Norway, apparently of pneumonia.

He was buried on shore, his grave marked by a stone cairn assembled by Norwegian school children.
.

Email ThisBlogThis!Share to TwitterShare to FacebookShare to Pinterest
Labels: whales

Don't orcas have a lifespan of 60-80 years? This reads like he was some sort of sad child star. Dead at 25 after trying to go back to a normal life after all the glitz and glamor of showbiz.

I do not think I could have said it better Stacey!

In fact, I wish I had put it that way! Perfect.

Female orcas have an average lifespan of 50 years. Some have made it to their 70's or 80's.

However, the lifespan of a captive orca is almost always shorter than a wild one. Only two captive cows are in their 40's.

I can't stand seeing Killer Whales and Dolphins in captivity. I've always refused to go to seaworld or anywhere else that feature them jumping around in big swimming pools for people's entertainment, it just looks so stupid and unnatural. I would much rather see them in the wild.
Sue

Playing a bit of devil's advocate here. In an ideal world, the general public would be able to understand the needs of the planet we reside on, specifically the plants & animals we share the planet with.

That's in an ideal world, that all would be cognizant that we need to respect and nurture what is here. That we are not the only beings that inhabit this earth.

Many people will not connect with flora and fauna, unless they can see or touch it. Looking at a book doesn't cut it with most people. So these zoos, botanical parks, aquariums, etc do serve a purpose; it helps to connect the general public to these animals, plants etc. It's easier to make people care about what happens to these things if they have a connection with them.

I find places like zoos, the Sea Worlds of the world a necessary "evil" in order to be able to get more people connected with the planet and the things in it. So these places do serve a purpose besides some being moneymaking ventures. jmho

All that being said, it's sad to see these magnificent creatures swimming around in what for them, must be like a bath tub.

The most insightful thing ever written about Keiko: