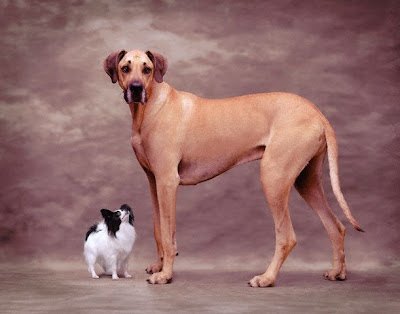 Over at Science Daily, they are reporting on a new study by biologists Chris Klingenberg, of The University of Manchester, and Abby Drake, of the College of the Holy Cross in the U.S., on the extreme morphological variation to be found in the world of dogs.

The core findings, published earlier this week in the peer-reviewed journal, The American Naturalist, are that:

Hi,
I think we should get into higher detail here. What happens to dogs is not unprecedented in terms of absolute fitness. In fact Fresian cattles, broilers, landrace pigs, and angora rabbits, just like many other domesticated species are unfit to survive in the wild. What happens to the dog is not even unprecedented in terms of amplitude of selective pressure (artificial selection), if you think at the enormous differences between a fresian cattle and Limousine or between a Merino and a Sarda sheep.
What is unprecedented and totally insane is the direction and purpose of the selection, which has now become for many breeds solely based on cosmetic features and the totally unprecedented inbreeding.

Most sheep, cattle and rabbit are not dramatically changed from their once-wild varieties. In fact, most sheep are turned out into fields for a season with relatively little oversight -- ditto for cattle. Unlike some dog breeds, as the authors of this report note, they can breathe unobstructed and eat in the wild, and so are not "unfit for function" at that level. If you were to "wild up" domesticated stock so they would stay away from predatorsa (i.e. make them "street smart"), the examples you give would survive outside for a pretty long time (and, in fact do, when lost from herds as they so often are).

With dogs, however, the variation is FAR more extreme -- find any species as varied in form as the two dogs at top. It does not exist. A tea cup chihuahua can weight 2 pounds, a massive Great Dane 200 pounds. No type of sheep, goat, chicken, rabbit, or cow has that kind of size variety. In fact, if you flesh out different varieties of sheep, goat, chicken, rabbit, or cow, the bone structure underneath is going to be very, very similar -- so similar that you will probably not be able to identify the breed. Not so with dogs, where the bones of a Dane, a Bulldog, a Chihuahua and a Dachshund (to name four species) look like completelty different animals -- as different as a giraffe and a camel, or a chicken and an ostrich, or a cat and a walrus. No single species has been morphed into such extreme variation as the dog.

This is a pretty important study, but it is kind of obvious.

This variation is only somewhat mirrored in the wild population. The smallest wolves were the Shamanu of Japan, which weighed could be as small as a Western coyote, while the largest wolf on record came from Alaska and weighed 175 pounds. Of course, that variance is less than it is in domestic dogs, and both animals had the same basic design. The smallest subspecies that exists right now is the Arabian wolf, which weighs about 40 pounds.

This tells us that within the gene pool of this species there is a certain elasticity, and I think we're reaching its breaking point. When you have bulldogs than can't breathe properly or reproduce without massive human intervention or you have rough collies that are born with such long muzzles that they can't nurse, we may have already reached it.

Here's why the dog is so elastic:

BTW, that must be a huge Great Dane in that photo. The little dog looks like a Papillon, not a Chihuahua, and Papillons are larger than Chihuahuas. Its muzzle is much longer than I typically see in Chihuahuas.

I don't think we need a lot of science to tell us that a pug is a grotesque mutation and unable to survive on its own.

Yes, that's a Papillon in the photo, and either a Great Dane or an "old school" Fila Brasileiro (not much difference in those two back a few decades).

I mention a teacup Chihuahau v. Great Dame comparison because they are the largest size differentials in dogs. That's a stock photo -- never read the creatonist fellow (and won't, I can assure you!).

Whether to lump or split in terms of breed types and species types is an ongoing and continuous debate. I have to confess I am more of a lumper, largely because the push to speciate is mostly political (and fundraising and ego-driven in terms of naming) and the animals themselves are often not quite as finicky as the scienitsts and taxonomers. A Coyote will screw a wolf, who will screw a Dog, who will screw a Golden Jackal, Who will screw a dog, which will screw a Dingo, and fertile pups will come out of all of it. The folks who say a dog is 100% wolf, seem to miss the fact that the wolf is not even 100% wolf.

Along with dogs, of course, one of the most plastic species is humans. Massive variation here in terms of size (under 2 feet to over eight feet), weight (50 pounds to 2,000 pounds), color (snow white to jet black), hair (bald to wolfman), facial features, etc.

The extremes in dogs are also genetic defects. The difference is that for humans we do not run around trying to line breed dwarves and midgets and people with runaway pituatary glands in order to creat more of them to trot around on a string leash in a show rings. With dogs we do.
Giant people and giant dogs die of the same heart problems, while "litle people" and little dogs have the same kind of skeletal issues.

When humans can create a new generation of dogs every 63 days, it's not difficult to see how quickly things can go awry. Yeah, yeah, I know that "generation" has to mature to breeding age to truly create the next generation, but the point is a short gestation (and short maturation) sends the boulder rolling down hill pretty quickly. Whether you end up with a strike or end up with a gutter ball at the bottom of the hill is pretty much up to what the humans do the next time. It seems that to some it's less sexy and interesting to continue to produce the same, hopefully sound and functional dogs as the last successful litter than to go off into proverbial left field. I think that some humans begin to lose their ability to accurately "see" traits and therefore breed animals with more exaggerated features, much like people who get hooked on their own plastic surgery no longer see themselves accurately. I've seen it in people, dogs and horses, and exaggeration of something once useful and attractive usually ends in disappointment if not outright disaster.