Dogs and Other Pets on Bicycles and Motorcycles 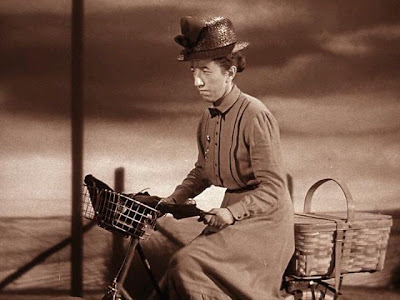 Miss Almira Gulch in the Wizard of Oz had a pretty nice rig! 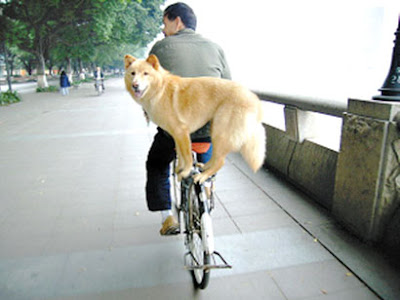 Photo out of China. Amazing!
.

The dog "hanging 20" on the back of the bike in China looks to be an unimproved Chow-chow. http://stephenbodio.blogspot.com/2009/10/qualzucht.html

Yes, that's what they look like in their home country!

I assure you that this dog, and the other one on Bodio's site is not a breed; they are simply versions of the generic yellow dog found all over Asia and frequently seen in the markets, packed into wire cages, waiting for the stew pot. Sometimes they make a life as a pet if they are very lucky.

Here is what a chow in China looks like and pretty much always has >> http://lh5.ggpht.com/fisherwy/R11JGazeUGI/AAAAAAAAL8Q/gxUxHWHoptE/chauffeur+chow+chow+dog%5B2%5D

I have to say that I'm not an expert on the dogs people eat.

However, I did figure out that the Pekingese didn't always look like we breed them in the West.

Konrad Lorenz had a Chow that looked a lot like the dog in the photograph, though.

Chows originally came from Mongolia, where they were called "Lion Maned" dogs.

The most common Chinese and Korean eating dogs looks to be a shepherd-collie looking dogs, and though they can come in any color, they are most often yellow. The fur is fairly long, in part because eating dogs is most common in colder parts of asia where dog meat is supposed to help "warm the blood" and alleviate arthritis. They are a bit bigger than a pie dog (shepherd size) probably because you get more meat and better cuts. Too fine a point can be put on this, of course: these dogs are not a breed, but a broad type and there is a lot of variation along the edges.

I have walked through two of the largest markets in Asia and seen crates of dogs, tubs of turtles and eel, steaming tubs of pigs head, bizarre fish of every kind ... and not a single chicken anywhere.