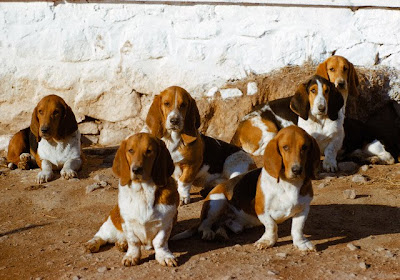 NOT the dogs in question.

The Philadelphia SPCA has put out an update about the Murder Hollow Bassets owned by Wendy Willard.

On Friday, August 7, 2009, Humane Law Enforcement officers from the Pennsylvania SPCA conducted a pre-arranged follow-up inspection of Murder Hollow, the location of an illegal basset hound kennel in the Roxborough section of Philadelphia, PA. The owner had previously surrendered 11 dogs during the officers’ visit on Monday, July 27, 2009, due to unsanitary conditions, lack of veterinary care and more dogs than allowed by law.

Despite the time allotted to the owner to make improvements, overall living conditions remained poor at the second inspection, resulting in 11 citations for unsanitary conditions, 11 citations for lack of veterinary care and two tickets for barking. Graphic photos of the dogs detailing their condition and their housing have been turned over to the district attorney’s office.

[W]e know a bit more now than we did a while back, due to a combination of admission and omission.

The admission comes from Ms. Willard who, in a letter going around the Internet, says the ceiling tiles were coming down in the kennel. As a general rule, ceiling tiles come down due to a leaking roof. I am not sure that this was the case here, but if it is, I do not think it would take much rain water, bedding, and dog crap to make an ungodly mess inside a kennel with 25 dogs.

Is that filth? Absolutely!

The omission here is two-fold: little or no mention about the state of the dogs in Ms. Willard's "letter to many," and the complete absence of photos.

Ms. Willard no doubt owns a camera. You can be sure the SPCA was taking pictures, and she would no doubt have seen that occurring, and would have gotten the idea very quickly.

If things were pretty bad-looking, she would fold up and let the dogs be taken (that is, in fact, what occurred).

If the kennels were in great shape, however, and the dogs were in fine fettle, she would have run to get her own camera, and those pictures would have been up on the Internet before the SPCA hit the first traffic light out of her place.

Of course, that has not happened, has it? Instead, the SPCA has sent its pictures to the district attorney’s office.

Remember, these SPCA pictures were taken at the time of the THIRD visit by the SPCA.

Even now -- on a fourth visit some time later, the kennels are not yet in order, and the dogs needing veterinary care have not gotten that attention.

Here's an idea: To hell with Wendy Willard!

How about we start thinking about the dogs?!

I jumped the gun on that one.

The SPCA was trying to do things the nice way.

I would like it if these dogs were adopted out to actual working packs and not altered, instead of being offered as rescued pets. (I don't know how one would actually get the PSPCA to go along with this suggestion, because my guess is that PA has a law against releasing intact shelter animals to the public.)

We don't have very many working English-type bassets left, and every hound is priceless.

So not only did she eff up her own breeding program. She effed up an entire source of genetic diversity for the working English basset.