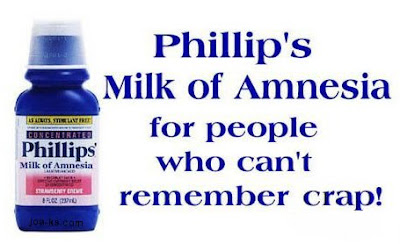 We are a nation of amnesiacs.

I was reminded of this today when someone sent me an email whose subject title read: "Sunstein.....a SCARY man for hunting folks."

Oh right! Now I remember. I was supposed to be terrified of this man back in January.

The rap back then was that Cass Sunstein -- someone I have never heard of before or since -- was some sort of animal rights loon in the Obama Administration who would singlehandedly decide everything there was to decide about hunting, fishing, and dogs.

I wrote about the kerfuffle and what a freight train of nonsense it all was.

And was has happened with Obama and the dreaded "animal rights" agenda since then? Has Cass Sunstein managed to singlehandedly end all hunting, put vegan diets on the school lunch program, and ban all dog breeding?

In fact, the Obama Administration has greenlighted the hunting of wolves, and said that its environmental decisions will be determined by sound science and wildlife biologists, not by politicians or presssure groups.

The head of the Dept. of Interior is a western hunter who wears a cowboy hat and thinks we should greenlight polar bear hunting.

The head of the Dept. of Agriculture is the former Governor of Iowa where farming is more than a way of life.

And what about your state? Well, if you want to hunt deer, go ahead and knock yourself out. Ditto for any other hook-and-bullet pursuit you have ever wanted to pursue. Nothing has changed.

Which got me to thinking about the other right-wing lies we were told back when Obama was running for office.

Remember when we were told that Barack Obama would take away all our guns?

Not only has that not happened, but a Democratic House and Senate passed -- and Barack Obama signed into law -- legislation that would allow guns to be carried into our National Parks.

And, for the record, the person who banned guns in our National Parks in the first place was not a Democrat. It was Ronald Reagan. Funny how the GOP always fails to mention that!

And remember how we were supposed to be outraged about Barack Obama's minister? Can you even remember his name now? Doesn't all the fear-mongering going on back then seem entirely contrived now -- and overtly racist too?

Looking back, isn't it clear that the real fear that was being pushed down our throats was the fear that a black man might become President of the United States? Oh! My! God! Suppose the darkies do to white people what white people did to them?!!!

That was the real subtext of all that Obama fear-mongering, wasn't it?

As I said of Obama in November of 2007, back when Rudy Giuliani was the Great White Hope of the Republican party and Hillary Clinton seemed to be the chosen candidate for the Democrats:


The more you see of this guy [Barack Obama], the more you realize how incredibly solid he is. As time goes on, more and more people are going to pay attention, and the folks making the sniping comments about race and name are going to look smaller and smaller until at last they both reveal and embarrass themselves at the same time.

Which, in turns out, is exactly right.

But of course, the liars and hate-mongers have not stopped throwing their spew, have they? No, they have not.

Let's not forget that lies and hate have consequences. Back in April when the Department of Homeland Security suggested, in a 9-page memo, that unbridled hate-mongering from right-ring blogs, talk radio, and Fox News might incite people to radical terrorism, especially in the anti-abortion arena, The Catholic News Agency was outraged at the suggestion! Of course they were NOT outraged by the fact that Bill O'Reilly was on FOX News every night repeatedly accusing a Kansas doctor of "executing babies" for any reason under the sun provided he was paid $5,000. And never mind that it was a demonstrable lie -- it was outrageous that anyone might think that by simply repeating that lie, night after night, such a thing might have consequences and drive people to murder.

But it did have consequences. didn't it? It did result in murder.

And when the news media reported that fact, what did Bill O'Reilly do? He simply lied and said he never initiated anything -- he was only repeating what others had said.

Which is not surprising. Liars lie. It is what they do.

Aren't you tired of it?

Then stop being silent! Stop allowing the lies to go unchallenged.

America was lied to about Iraq and we stood around silent then, and now, despite the fact that those lies directly resulted in the death of more Americans than Osama Bin Laden and his henchmen did on 9-11. So why is Dick Cheney not on trial? Why is Donald Rumsfeld not in the gallows?

And have any of us forgotten about the other lies we were told?

Remember when the GOP was telling us that we should privatize Social Security, for instance? We were supposed to turn it all over to Jim Cramer,

Semi-related: I read yesterday that New Orleans mayor Ray Nagin and wife are quaranteened in China because of swine flu fear.

Thanks, Patrick. I'm spreading this one around Teh Interwebs.