PETA Told to Go to Hell 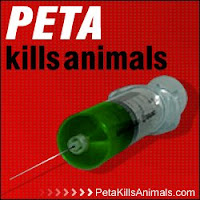 Jemima Harrison, the producer of Pedigree Dogs Exposed is furious that PETA has stuck its ugly maw in where it is not wanted, and is not needed.

Her message to PETA: Shut up and go away ... and maybe go to Hell while you are at it.

The makers of Pedigree Dogs Exposed, the BBC documentary film that led to the BBC withdrawing from televising Crufts Dog Show in the UK are furious with PETA for jumping on the film’s bandwagon.

Earlier this week, PETA called for the US networks to stop televising Westminster Dog Show, citing the BBC film as evidence of unacceptable deformity and disease in pedigree dogs.

Pedigree Dogs Exposed was the result of two years’ careful research. The film highlighted serious health and welfare concerns in pedigree dogs that many experts agree need to be addressed urgently. However, the filmmakers have no connection to PETA and are idealogically opposed to PETA’s aims.

“I am horrified that PETA is using the film to further its own, warped agenda,” says Jemima Harrison, of Passionate Productions, which made the film for the BBC. “Our film is about animal welfare, not animal rights.

“PETA’s animal welfare record is appalling. It kills 97 per cent of the dogs that come to its shelters and admits its ultimate aim is to rid the world of what it calls the “domestic enslavement” of dogs as either pets or working dogs.

“In stark contrast, and the reason we made the film, is that we believe pedigree dogs are of tremendous value to society and that something needs to be done to arrest the damage caused by decades of inbreeding and selection for ‘beauty’. The film is a passionate call for urgent reform to save them before it is too late. To do that, there needs to be urgent reform of breeding practices and dog shows.

“PETA is a bunch of crackpots who do not care about anything but publicity and making money. They have not bothered to contact us - and, indeed, if they did we would make it very clear we do not want their support. It devalues and marginalises a film that raises a serious issue that needs to be addressed, and quickly.”

The staff is aware that the shelters would be needed to kill some animals???
which are not always???? beautiful, beautiful, or a small size, "says Newkirk.

today it is putting into question the good faith of many associations inspired PETA, in Europe.


"PETA is a bunch of crackpots"

or because they drink milk!
but if a cow used for milking,

This does not mean that the kill, can die old and happy

I am absolutely stunned at the PeTA marketing machine.

Yesterday, I watched the movie "27 Dresses" on TIVO (quick -- how many people think Patrick saw this movie, either in the theater or on TIVO? ;-D) and the "cute boss" character was protrayed as the type of environmental business guy we'd all like to see more of. However, what was used to cement the idea that he "loves animals"? Besides his really cute Bernese Mountain Dog (was actually shocked he didn't have a Border Collie), there were several clips showing him at PeTA events!

Not only that, but everyone in the company has PeTA mugs on their desk!

The disconnect between what I saw in the movie (PeTA is shorthand for I love animals, including my doggie buddy) and what is well-documented in real life (PeTA is about removing animals from human life by any means necessary) totally blew me away.

Unfortunately, I think this is the answer to Gina's question: "Why does anyone listen to PeTA?"

PeTA has one heck of a marketing campagin.

Did you see the latest from PETA? It seems the powers at PETA are offended by the name of the Spearfish, S.D. high school, which is named...Spearfish High School. The dorks are trying to get the school system to change the name to Sea Kitten High School. What next? Change the name of the town? Oh, and I'm a bleeding-heart liberal by nature, but still want the Washington Redskins to be called the Washington Redskins, too. Sometimes P.C. needs to stand for personal computer.