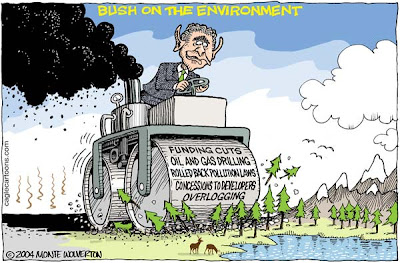 The Bush Administration is set to allow a logging company to pave 900 miles of logging roads through National Forest land in Montana so that Plum Creek, a private timber company, can sell off land as tract homes for wealthy vacationers and rich retirees.

Spearheading the initiative is Mark E. Rey, a former timber industry lobbyist who is Under Secretary for Natural Resources and Environment at the U.S. Department of Agriculture.

Rey has rammed this proposal forward without an Environmental Impact Statement, public hearings, or a public comment period, and in direct opposition from the State and the non-political appointees at the U.S. Forest Service.

Senator Jon Tester (D-Mont.) and Senator Jeff Bingaman (D-N.M.), who chairs the Energy and Natural Resources Committee, have asked for an inquiry by the Inspector General of the Agriculture Department, which includes the Forest Service.

While on the campaign trail, Barack Obama criticized Rey's efforts to pave forest service roads and cut up wild lands in Montana, noting that a landscape dotted with luxury homes would have a permanent impact on Montana's tradition of hunting and fishing:

"At a time when Montana's sportsmen are finding it increasingly hard to access lands, it is outrageous that the Bush administration would exacerbate the problem by encouraging prime hunting and fishing lands to be carved up and closed off."

Of course, the Bush Administration has never give a tinker's damn about hunting or fishing on public lands. And why would they? Dick Cheney is a canned hunt man who plinks planted pheasant and quail for a per-bird fee, when he is not visiting his millionaire and billionaire friends to hunt on their vast estates (and occasionally blasting them in the face).

If this Bush Administration proposal goes through, you're going to see a lot rich folks in Montana whining in the not-so-distant future that the American people should be spending vasy sums of money (and risk human life) in order to protect estates built in the woods (and often on ridges) from predictable forest fires.
.
As The Washigton Post put it:

"Scenic western Montana, where Plum Creek owns 1.2 million acres, would be most affected, placing fresh burdens on county governments to provide services, and undoing efforts to cluster housing near towns."
.

Huge mistake. That ecosystem is very fragile and there are already serious issues with water due to overdevelopment.

I don't know if you've read 'Collapse', it's an informative book about why societies fail, albeit a touch dry and pedantic. There's a big section on Montana.

Why is Bush doing all this to the country in his last days? Hasn't he done enough?