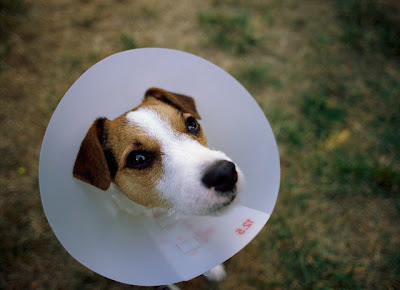 When a veterinarian submits a "prospective bill" before doing the work, look it over and see what you can cross out.

I got a recent email from my new clinic suggesting that since heartworm season is over here, it's time for monthly - monthly! - worming with Interceptor.

You know,I've only wormed dogs a few times in my life because of tapeworm evidence due to the eating of mice. A shot of Droncet, in other words, which is cheap at about $15 (I know you'll think it's too expensive).

The email was basically a dire warning about dogs dropping parasites all over the house, on the furniture, etc.

This clinic has been excellent thus far (got my old Wiener dog off unnecessary meds he took fo 7 years, for example) so I'll let this one go as just running it up the flagpole.

2) Teeth cleaning, while most likely not a yearly need, actually IS necessary and estimates are done AFTER discussion and consent is given.

Many places also have a group code for the dental that includes hospitalization, cleaning/polishing, monitoring and drugs, all at a discount from what everything would normally cost when itemized out for a typical procedure. Some places also offer a percentage or dollar amount off THAT in February. If a mass removal is also involved, that is your "Add-on" charge; it is often more expensive to do a simple mass removal by itself (again, itemizing out all the services for the day) than it is to add it on to a dental cleaning, which already has a significant discount added in as a default.

The longer people wait on performing a dental when medically necessary actually increases the out-of-pocket cost since extractions may be needed--seriously, if you want to talk about COST, let's discuss the people who DO NOT WANT severely fractured teeth removed and are willing to pay for that root canal or worse, wish us to NOT EXTRACT that infected tooth because they just don't want the dog to lose teeth. It's honestly a better investment to keep the teeth clean in the first place and since most people are not going to care about (or even unaware of) how to do this at home, having the procedure done as often as necessary before the gingivitis becomes too bad is worth the trouble. For the little toy breed or brachycephalic mouths, that may be yearly. For the larger dogs, it should be every few years or ideally (as you preach) only a few times in their lifetime.

We have people coming to us regularly saying that their dog's mouth STINKS, but they are absolutely SHOCKED when we show them the state of the dog's mouth, which can range from the chunky tartar to draining pus or teeth that are so mobile as to only be held in place by the gingival tissue. I don't know why people just can't look themselves. It's sometimes a handling/training issue, but usually it's just one of ignorance and apathy ("BUT HE'S STILL EATING!") until it becomes OUR problem because we pointed out the reason for the stench and now fixing it is just TOO EXPENSIVE.

10) Most kennels do not add on charges. It is the PEOPLE asking for all the extras because the OWNER'S separation anxiety is such that the guilt THEY feel for leaving poor Fluffy out of the fun of vacation persuades them to ask for everything including the bedtime kiss. It's a sad state of the industry. People have forgotten that a kennel should be safe, secure, clean and well-managed; instead, the focus has become about comfort, interaction, "spoilage" and the giving of every single treat (owner-provided or otherwise) at a specified time in a certain manner or else Fluffy will go into a meltdown because that Greenie or frozen Kong wasn't DONE RIGHT on HIS SCHEDULE. If my basic per-night charge has to include CCTV, a carpeted "room" with a doggy "couch" and music piped in, forget it--I will go elsewhere to a real kennel. If someone is brazen enough to want all the extras and then some, then they can either go where it is provided or hire someone to stay at their house to care for their pets. Pets with certain medical/mobility needs also benefit from in-home petsitting as well as those who do not do well for whatever reasons in the kennel environment--but the cost of paying someone to do this vs the per-night charge of a kennel is also something to consider!

I've got a whole post on teeth and the push for annual teeth cleaning. Its a scam, same as annual vaccines. I am not saying NEVER clean a dog's teeth, anymore than I am saying don't vaccinate. http://terriermandotcom.blogspot.com/2009/07/pearly-white-profits.html

I'm also not talking about boarding kennels; I'm talking about vet offices where front line vet personnel are told, instructed, and evaluated on how much nonsense they can up sell. This is the vet industry today -- overcrowded, often held in a partnership or a holding company where the bottom line is the bottom line. There's a reason Mars candy is now in the world of pets, and it's not because they care about Fido. The Journal of Veterinary Economics always makes for fascinating reading! :)