Maladaptive Is a Two-Way Street 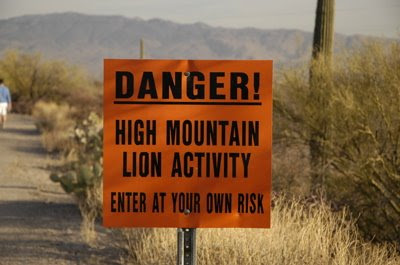 This story is repost from August 2008.

"Maladaptive" is one of those nice words that skirts over a wide range of bad outcomes in predator behavior -- anything from a lost tooth or torn claw for tackling too large a piece of game, to a torn flank if gored or ripped by a large animal, to death -- the most maladaptive outcome of them all.

In this case, the maladaptive behavior occurred when a mountain lion, about 15 miles outside of Denver, entered the open French doors off the backyard of a family's main bedroom. Inside was an adult couple with their two dogs asleep on the floor at their feet.

The big cat ignored the couple and went for the family's 12-year-old yellow Labrador Retriever, which was killed, partially eaten, and its body left partially covered over under a nearby pine tree.

When the 135-pound mountain lion later returned to finish his meal, a shooter for the Colorado Division of Wildlife put a bullet through its brain.

It's one thing for a cougar to snatch a lamb, cat or farm dog from the remote edge of a farm; it's quite another for a lion to have so little discretion around humans that it feels secure enough to enter a bedroom or living room. There's no coming back after that, and a bullet to the brain is always going to be the response, as it always has been.

That said, I bet these folks never sleep with the doors wide open again, and I bet they never leave their pets outside unguarded in mountain lion country.

Lions are not the only thing being trained in this story; so too are the humans.

"Maladaptive" is a two-way street!

Email ThisBlogThis!Share to TwitterShare to FacebookShare to Pinterest
Labels: maladaptive

"That said, I bet these folks never sleep with the doors wide open again, and I bet they never leave their pets outside unguarded in mountain lion country."

Or, of course, they could get an Airedale.

I've read several accounts of this story and it still leaves me with unanswered questions. The story is always told that the puma instantly killed the dog, grabbed it with its mouth and ran out the door. This labrador should weigh about 60 pounds and while no match for a puma can put up a skirmish for a moment even if it is 12 years old. From my own experiences with pumas, I wouldn't think the cat was in its ultra quiet "stalking mode" when entering this house and find it hard to believe the puma wouldn't disturb either of the 2 dogs. The dogs are having their own "den" invaded and should both under such circumstances be ready to fight to the death regardless of the opponent. Yet, I'm suppose to believe the other dog did nothing after a fellow pack member was killed in its own den. Also, how does the cat grasp a dog that size in his mouth and then run with it? A friend of mine had a puma as a pet for years and played fetch with a variety of balls. Pumas are incredibly strong but even with it just holding the dog's body by his fur, I can't see the cat running at a gallop with anything the size of yellow Labrador.

A biology professor I had when I was an undergrad had a story about a friend who was doing fieldwork in Africa. They had a small house with 2 dogs. One night a leopard came in through a kitchen window, killed a dog and took it out through the window without making a sound. They found the pug marks on the windowsill and the missing dog in the morning. I don't know what type of dogs, but a similar story, only the leopard got away with it.