Coyotes in the Bronx. . . Again 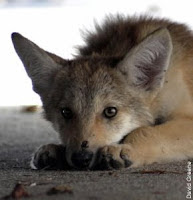 "A young coyote pup that was found wandering around in the Bronx is now headed to an animal rehabilitation center. Animal Care and Control said "Oscar" is headed to Long Island to reside at the Star Foundation, which rehabilitates animals. The six-month-old coyote was found roaming in Riverdale on Wednesday. Officials believe he got separated from his litter." - Source and more on previous NYC coyotes
.

Pat: we live on the other side of Van Cortland Park from Riverdale and we saw a coyote in the woods at 7:30am last Monday (7/13). My wife saw another about two months ago. The most recent one was clearly an adult and barked gruffly at me after I'd called our two boys away. Wonder if it was Oscar's mum or dad?

In our section of the park we've also seen deer prints, flighted turkeys, and the boys have pointed pheasant and migratory woodcock.

That has to be the same little band of coyotes, I would think.

Excellent, though nothing good will come to them, I am sure. New York can be a tough town. And I know; I saw both "Midnight Cowboy" and "Gangs of New York"!!

People have no idea how much wildlife is around them even in our urban areas, mostly because critters move at night. My folks live in the urban core of Washington, D.C. near Connecticut Ave. just off Dupont Circle, and they had a raccoon greet them at the front door the other day. Though that is a bit unusual in their area, it's a fact that one of the highest raccoon densities ever found is in Rock Creek Park (near the Fort Totten trash transfer location, I am assuming):

"The highest Raccoon density we could find in the literature came from one small (30 ha) section in
Rock Creek Park (710 ha total) in Washington, D.C., where the density was estimated as high as 333 km2, and estimated Raccoon densities from other study sites in the same park ranged as high as 172 km2 (Riley et al. 1998)."