Dinosaurs in Disneyland vs. Hides on the Bayou 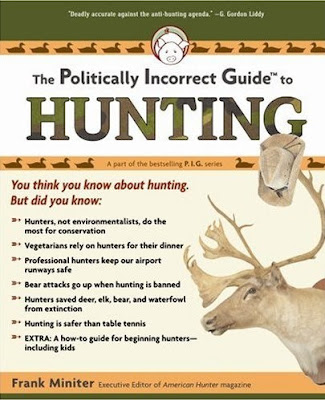 Back when I took vacations, I used to go to Hilton Head, South Carolina which is a very nice location where the family can ride bikes through beautiful woodsy areas, frolic on nearly-perfect beaches, and otherwise have a grand old time.

Sea Pines resort was created by Charles Fraser, and I came to know about it by reading John McPhee's truly excellent book about David Brower, entitled Encounters with the Archdruid, which still ranks as one of my top 10 favorite books.

When I first went to Sea Pines, I was skeptical and figured it would be a boondoggle surrounded by a morass. Few things are as pleasant as they are made out to be. Instead, I was surprised to discover a place rather heavily developed with multi-million dollar vacation homes and golf courses, but boasting a significant array of wildlife, and still-stunning beauty. Fraser did a good job of developing this place, and even the Sierra Club's David Brower had to give it a nod. As development, this was pretty nice.

Being a poor wage slave, the family and I could not afford to stay in a huge stand-alone mansion like that owned by Michael Jordan, but we could afford a week at a rather well-done town house in Sea Pines. Each of these townhouses backed up to a lagoon, and while everyone else was running off to the beach, I would often stay back, break out the fly rod, and go fishing at the edge of the lawn.

Every lagoon had fish in it, and there were lots and lots of lagoons. The fish were not huge -- little bass and lot of pan fish -- but they provided the kind of fast-sport I like, and so from about 8 am to 10 am, when it was not too hot for the fish to bite, I cast line.

After 10 in the morning, there was no point in casting for fish so I would change the game by tying on a dry fly and tipping it with a small bit of salami rind. This is the ideal rig to use if you are fly-fishing for turtles. This is low sport, but I am a low-sport kind of guy.

One day I hooked a turtle and was hauling it in, when I noticed a small wake following behind. It was a small alligator -- maybe 5 feet -- and before I could say "Bob's your Uncle," it had taken hold of the turtle and was trying to make off it with it.

Now remember the rig I am using here -- a four-piece backpacking fly rod with a regular monofilament tippet. A 10-pound turtle is on the hook, and this five-foot alligator is on the turtle. This was going to be fun! And it was fun -- for about 30 -seconds -- and then the alligator realized there was some odd pressure on the turtle and he released it.

Now what do I do? Well, play through, of course. Which I did.

Unbelievably, the turtle was still hooked, and so I hauled him in, with the alligator following behind. When I pulled the turtle up on the bank, the alligator left the water following it. I backed up fast, letting out line at about the same speed as I was moving backward. It was then that the alligator saw me, turned tail, and -- splash -- he was back in the water.

But this alligator did not leave the bank. He knew I was a good bet to provide him an easy lunch, and try as I might to shake him by going around one side of the lagoon or the other, he would follow me hoping to steal my catch. Fishing was over for the day.

I tell this story because this is the only alligator story I have. I have never lived in a state that had alligators, and my first regular sightings of alligators have almost all been at Hilton Head. Every lagoon and golf course pond at Hilton Heads seems to have at least one or two of them, and yet there are old folks, children and pets everywhere. So I asked an islander working a boiled-peanut concession: Did they ever have any trouble with gators? "No, not really," he said. "Of course we don't let them get bigger than 6 feet before we relocate them."

Ah! I got it. Small is safe, and big is not. Common sense at work.

Of course common sense is pretty well misnamed, isn't it? Pretty rare stuff as far as I can see.

For instance, would you go snorkeling in a lake or pond with massive alligators in it? Me either. But, of course, there are people who do such things ... with predictable results. 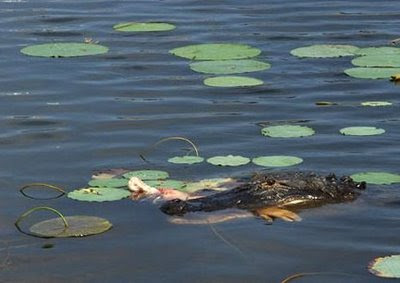 A picture of the arm and the alligator taken immediately after the attack.


The story in yesterday's newspaper was about an alligator attack in South Carolina. As the story is told in The Telegraph and other newspapers:


Bill Hedden, 59, was snorkelling last Sunday in Lake Moultrie, in South Carolina, when his arm was bitten off by a 550lb alligator.

Nearby picnickers were shocked when Mr Hedden stumbled into their midst, grasping his left shoulder where his arm should have been, gushing blood and screaming: "Call my wife, call my wife!"

Nurses on a retreat 50 yards away ran to the scene and slowed the flow of the blood until paramedics arrived and put Mr Hedden in a helicopter.

He was taken to the Medical University of South Carolina, which declined yesterday to release any information on his condition or treatment, citing the family's request for privacy.

The Charleston Post and Courier reported that a family member said doctors were unable to reattach the arm, but that Mr Hedden was nevertheless in good spirits.

"The first order of Bill's care has been to stop the bleeding and save his life. His surgeons and health care team are determining the next steps in his care at this time," the family said in a statement. "We are in good spirits and thank everyone for their thoughts and prayers."

Mr Hedden's arm was retrieved from the alligator's belly after wildlife officers shot the 11ft 10in animal. The limb was then rushed to the hospital in a picnicker's ice cooler with a police escort.

There have been no confirmed deaths in South Carolina involving alligator attacks, wildlife officials said.

As luck would have it, the morning this article showed up, I had just settled down to reading a book sent to me for review: The Politically Incorrect Guide to Hunting by Frank Miniter, the Executive Editor of American Hunter magazine. More on that book when I finish it, but suffice it to say that the first chapter on alligators is very good.

In a chapter entitled "Why Florida Has Killer Gators," Miniter notes that when the residents of Sanibel Island decided to ban all hunting and culling on the island in order to "be at one with nature" and return it to the Eden they imagined it once was, they failed to figure on The Alligator Issue.

A small alligator, under 6 feet long, is no real threat to humans, but once an alligator gets over 7 feet, pets and people may go missing.

On Sanibel Island this reality was put front and center when a 12-foot 457-pound alligator grabbed a woman on the island while she was gardening and pulled her into the water. She subsequently died.

The town decided to change their position on hunting, and began to cull all alligators over four feet on private property. In the next 6 months, trappers killed at least 80 large alligators on Sanibel, some over 14-feet long.

Sanibel Island's experience with large alligators is playing out across much of Florida, where dogs and cats routinely go missing, and it's not too uncommon to have a human attacked.

Perhaps such attacks are not too surprising in a state that has an alligator population of over one million and a human population of nearly 19 million, but it turns out that they are not necessary.

You see, you can have a LOT of alligators and no attacks on humans. That's the score in Louisiana. The reason: unlike Florida, Louisiana encourages licensed hunting of alligators, and alligator hunters go after the largest alligators in the easiest-to-find locations, i.e. the ones that are most likely to attack people and pets.

Louisiana actually has more alligators than Florida, but Louisiana alligators have never killed a human in that state's recorded history, while 11 people have been killed by alligators in Florida since 2001 alone.

The secret to Louisiana safety is that state's legalized hunting and harvest program called "Alligator Marsh to Market."

Remember, under 7 feet an alligator is not much of a threat to humans, but over 7 feet things change quickly. The bigger an alligator gets, the more likely they are to be a real threat to people and pets.

In truth, of course, alligators are not huge killers of people. In Florida, alligators kill fewer people than swimming pools and lawn mowers. That said, the number of alligator attacks in Florida is on the rise, from 78 people in the 1980s, to 159 people in the 1990s, and 97 people in the five years between 2000 and 2005 (suggesting about 200 attacks can be expected in the first decade of this millennium).

There are reasons to legalize alligator hunting beyond safety, of course. Miniter notes that Louisiana's "Alligator Marsh to Market" program creates an incentive for people to protect and preserve wetland habitat. It has also put an end to alligator poaching, as no one will buy poached skins if legally tagged alligators caught in the wild, or raised on farms, can easily be purchased.

Alligator farms are, in fact, a core part of the Louisiana alligator management plan, says Miniter. Every year folks go out and harvest eggs from alligator nests, and those eggs are hatched out in captivity away from predators such as raccoon, fox, possum, and wild pig. Baby alligators are raised up from these hatchlings, and when the alligators reach 3-4 feet in length they are harvested for hide and meat.

About 17 percent of the alligators raised in captivity , however, are released back into the wild as one- or two-year-olds. These 35,000 - 40,000 released alligators serve as replacement stock for those shot by hunters every year.

In the end, what Louisiana has created is a perfect win-win: Louisiana resident are made safe from alligator attacks, wetlands are preserved, healthy alligator populations are maintained, and an economic engine is created.